Update Required To play the media you will need to either update your browser to a recent version or update your Flash plugin.
By Caty Weaver
10 December, 2015


Kendrick Lamar has had a good week. The hip-hop artist led the music industry in nominations for its most important awards, the Grammys. The Recording Academy honored him with 11 nominations, including album of the year for "To Pimp a Butterfly." His song "Alright" was also nominated for song of the year.

Taylor Swift had a good week, too. She is up for seven 2016 Grammys. Her album "1989" will compete against Lamar's for album of the year. Her hit "Blank Space" was nominated for song of the year.

Taylor Swift and Kendrick Lamar are also nominated together for two Grammys. The musicians collaborated on the song "Bad Blood." For that effort they could share Grammys for best pop group/duo performance and best music video. 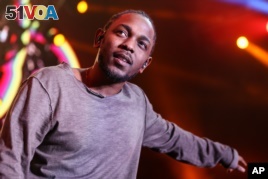 R&B star The Weeknd also received seven Grammy nominations. His "Beauty Behind the Madness" is up for album of the year. The other nominees are "Sound and Color" by the rock band Alabama Shakes and country singer Chris Stapleton's "Traveller."

Five nominees are up for the much-sought Grammy for best new artist. They are Tori Kelly, Sam Hunt, Courtney Barnett, James Bay and Meghan Trainor.

The Recording Academy will present the awards at a ceremony in Los Angeles, California on February 15.

Caty Weaver wrote this story for Learning English. ­­­­­­­­­­­­­Ashley Thompson was the editor.

Do you listen to any of the nominated musicians we reported about? Who do you think should win? We want to hear from you. Write to us in the comments section.

pimp - v. to get customers for prostitutes

blank - adj. without any writing, marks, or pictures

collaborate - v. to work with another person or group in order to achieve or do something