Update Required To play the media you will need to either update your browser to a recent version or update your Flash plugin.
By Phil Dierking
02 September, 2017


Kenya has joined the growing list of countries to ban plastic bags.

A new Kenyan law bars the production, sale and even use of polythene plastic bags. People caught breaking the law may be fined up to $40,000 or face a four-year jail term.

The cabinet secretary for the environment, Judi Wakhungu, told reporters that plastic bags are affecting Kenya's food and water supplies. "It is a toxin that we must get rid of," she said.

Plastic bags are used in many countries. People often get them when buying products from food stores or other businesses. But experts argue that polythene bags are bad for the environment and public health. The bags have been blamed for polluting cities and coastal areas. They have also been blamed for killing animals who eat them or become trapped in them. Marabou storks stand on a pile of recyclable plastic materials at the Dandora dumping site on the outskirts of Nairobi, Kenya August 25, 2017.

Kenya's National Environmental Management Authority (NEMA) notes that while the bags are thin, they never really break down into small pieces through natural processes. As a result, it warns, the plastic can remain "in the environment as small or even microscopic particles...forever."

NEMA officials have been urging retail businesses and manufacturers in Nairobi to obey the new ban. Geoffrey Wahungu, the director general of NEMA, is supporting a campaign known as the "take-bag" scheme. He is asking Kenyans to bring their own cloth bags or baskets from home.

"I hope soon we'll start seeing people who are carrying out these recycling materials, or alternative bags, which are eco-friendly. All this is creating much more employment than is being lost," he told VOA.

Kenya is the latest country to ban polythene plastic bags. Similar measures are reported to be in effect in at least nine other African countries. However, of the nine, only Rwanda has been successful in enforcing the ban.

In neighboring Uganda, for example, the move away from plastic has been slow. Officials banned the production, import and distribution of thicker plastic bags in 2009. Yet such bags are still in use today in the capital, Kampala.

The Ugandan government wants local manufacturers of polythene bags to support its calls for recycling.

Some Ugandans are hoping to earn a profit through efforts designed to protect the environment. Two years ago, Sharon Ninsiima started a business for removing plant fiber from banana stems. The fiber acts like cotton and can be used to make biodegradable paper bags.

"People consider our products expensive, which is true," she says. "But our bags are... safer than the polythenes...," she adds. "The polythenes are more dangerous and contaminate the environment."

Banning bags around the world

In Asia, several countries have also joined the movement to ban plastic bags. Bangladesh became one of the first countries in the area to enforce a ban after bags blocked drainage systems and caused serious flooding. 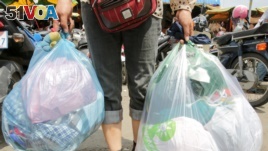 Plastic bags are seen using in Phnom Penh's Phsar O'Russei on the day of the launching an environment campaign "Combine in One," aimed at reducing the plastic bag consumption in Cambodia's major cities, on Friday, October 14, 2016. (Leng Len/VOA Khmer)

In preparation for the 2008 Summer Olympic Games, China banned thin plastic bags and raised prices for thicker ones.

Some European countries have started to either ban plastic bags completely or force businesses to pay more for using the bags. In 1994, Denmark became the first country to charge people for using plastic bags. Ireland approved a similar move in 2002.

In Central America, Costa Rica has said it plans to be the first country to completely remove all single-use plastic bags by 2021.

There also have been efforts to ban plastic bags in parts of the United States. In 2007, San Francisco became the first U.S. city to ban such bags. Nine years later, the state government in California banned them across the state. All county governments in Hawaii have individually banned plastic bags, effectively banning them statewide.

Chicago and other cities, such as Dallas, Texas, and Washington, DC, have similar bans.

However, not everyone feels that banning plastic bags is a wise idea. 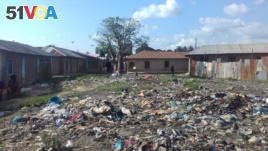 In Kenya, two plastic bag importers attempted to overturn the ban in court last week. But their effort failed. The National Association of Manufacturers says the ban will cost the country more than 60,000 jobs.

In the United States, groups like the American Progressive Bag Alliance, or APBA, have successfully campaigned to overturn several bans.

The APBA argues that banning plastic bags reduces jobs and harms working families, who are forced to pay more for food and goods. The group adds that the bags can be reused, and are less harmful to the environment than other products.

Some producers of plastic bags also oppose the idea of banning bags. Phil Rozenski serves as Director of Sustainability for Novolex.

"These laws were never about plastic bags, they were about reducing litter and marine debris. The major flaw is that this approach doesn't change human behavior, it only changes products."

He argues that the amount of carbon dioxide released in the manufacture of plastic bags is much smaller than that from bags made with other material.

Mohammed Yusuf reported this story for VOANews. Phil Dierking adapted his report for Learning English. The story also uses information from other websites. George Grow was the editor.

Do you think it is a good idea to ban plastic bags? We want to hear from you. Write to us in the Comments Section or on 51VOA.COM.

drainage - n. the act or process of draining something

contaminate - v. to make something dangerous, dirty, or impure by adding something harmful or undesirable to it

biodegradable - adj. capable of being slowly destroyed and broken down into very small parts by natural processes, bacteria, etc.

polythene - n. a light and strong plastic that is used mainly in sheets for packaging

recycle - v. to send used newspapers, bottles, cans, etc. to a place where they are made into something new

retailer - n. a person or business that sells things directly to customers for their own use

toxin - n. a poisonous substance and especially one that is produced by a living thing

litter - n. things that have been thrown away and that are lying on the ground in a public place

debris - n. the pieces that are left after something has been destroyed