Update Required To play the media you will need to either update your browser to a recent version or update your Flash plugin.
By Anna Matteo
02 January, 2017

In 2016, three viruses made news, and they present difficult problems for health officials in the New Year.

One virus threatens babies in many parts of the world. Another has reappeared in an African nation. And a third is one of the deadliest viruses of modern times.

The three viruses are Zika, polio and HIV.

However, in 2016 scientists and researchers from all over the world worked to make progress against those viruses and to develop better ways to control them.

The spread of the Zika virus caused public health officials in many nations to put in place strong measures to control its spread.

Brazil, which hosted the 2016 Summer Olympic Games, was hit hard by the virus. Health officials warned pregnant women against traveling to the sporting event.

Zika is usually a mild illness. It is so mild that most people who are infected do not know they have it.

However, in the past two years in the Western Hemisphere, Zika has been linked to babies to being born with extremely small heads. This condition is called microcephaly. The international medical community found that this link to birth defects makes Zika a very dangerous virus. 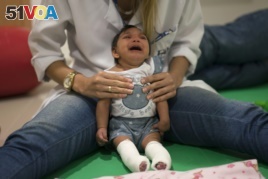 In this Feb. 4, 2016 photo, Luana Vitoria, who was born with microcephaly, cries during a physical therapy session at a treatment center in Racife, Brazil. (AP Photo)

Zika first appeared in Uganda more than 60 years ago. It is spread by mosquitos and by sex.

The virus recently appeared in Brazil. Then cases appeared in other countries to the North. Cases were reported in the United States in the southern state of Florida. Health officials in Texas are also concerned the virus might be spreading there.

Dr. Anthony Costello is with the World Health Organization. He says that even one child affected by zika has a very big impact on community resources and a family's ability to deal with the results. Costello considers the disabilities caused by zika to be a "huge blow" to families.

"It is a public health problem of huge concern for the world. Sixty-nine countries have seen the Zika virus emerge in the last two years. We are talking about a virus that causes brain damage and potentially lifelong disability which is a huge blow to families."

Doctors can only advise women to be careful. They advise women not to travel to areas where the virus is spreading, to avoid mosquito bites or to delay pregnancy.
Currently there is no vaccine against Zika. However, one could be available by 2018.

The return of a virus once thought to be gone or eliminated made news in 2016.

The polio virus returned in Africa's most populated country - Nigeria. Continuing violence in the northern part of Nigeria had made it difficult for all children to get vaccinated. At a time when Nigeria was thought to be almost polio-free, three children were diagnosed with the virus.

Polio continues to exists in another conflict area: along the border of Pakistan and Afghanistan.

But vaccination efforts continue to give health officials hope that polio can finally be eliminated.

Top health official suggests HIV vaccine could be near

In December, Dr. Anthony Fauci of the National Institutes of Health discussed testing of an experimental vaccine for HIV, the virus that causes AIDS.

Testing on a vaccine started in South Africa. The National Institutes of Health is partly funding the effort. However, Fauci warns that the process will take time and effort.

"An HIV vaccine is not going to be easy. We may not even know if we're going to get a vaccine."

He adds improvements in treatments for AIDS have lengthened the lives of those who have the disease.

"Today, the combinations of therapies we have for individuals - for someone who is in their 20s and gets infected and comes in and gets on a combination of drugs - you could predict that they would live an additional 50 years, 5-0. That is one of the most extraordinary advances in the transition from basic research to an applicable intervention in any field of medicine."

An effective HIV vaccine could finally mean the end for the deadly virus. HIV has infected more than 70 million people and has killed 35 million people over the past 50 years.

blow – n. an unfortunate or calamitous happening <failure to land the job came as a blow>