Update Required To play the media you will need to either update your browser to a recent version or update your Flash plugin.
By Andrew Smith
13 October 2022


Meta Platforms recently introduced a device that lets users combine the computer created world with the real one.

Meta showed off its Quest Pro virtual and mixed reality headset at the company's yearly Connect conference on Tuesday. It is expected to be available in stores starting October 25 at a price of $1,500.

The headset will offer consumers a way to interact with virtual images overlaid onto a full-color picture of the physical world around them. 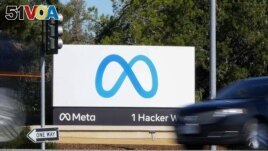 The new product is considered important for Meta's Chief Executive Mark Zuckerberg. It also is the company's latest effort to enter the market for extended reality computing devices that cost a lot of money.

Last year, Zuckerberg changed his company's name from Facebook to Meta. The aim was to show that the company was placing its attention on what it calls the metaverse. The metaverse is a computing experience where users share an immersive environment on computers.

Zuckerberg has spent billions of dollars on the project. Reality Labs, the Meta division responsible for building the metaverse, lost $10.2 billion in 2021 and has lost nearly $6 billion so far this year.

Zuckerberg spoke at the launch event. He was recorded partially in video and partially as an avatar. He said he expects the mixing of the physical and digital worlds will create new uses for computing.

"You're going to see entirely new categories of things being built," he said.

The Quest Pro has several improvements over Meta's existing Quest 2 headset. The Quest 2 is a top selling headset in the consumer virtual reality market.

The Quest Pro has cameras that capture a kind of 3D image of the physical environment around a user. This permits actions like placing a virtual painting on a real-world wall or having a virtual ball strike a real table.

The Quest 2 offers a simpler version of this technology, called passthrough.

The Quest Pro is lighter and thinner than earlier headsets. It has thin lenses and a battery that sits at the back. This helps balance the headset and reduce its weight.

Meta has added tracking sensors to the Quest Pro that can copy users' eye movements and facial expressions, creating a sense that avatars are making eye contact.

Meta says the Quest Pro can be a productivity tool that designers, architects and other creative professionals can use.

In addition to offering its own Horizon social and workspace platforms, Meta has also made virtual versions of Microsoft products like Word, Outlook, and Teams available. Microsoft chief Satya Nadella joined Zuckerberg to announce the partnership.

Matthew Ball writes about the metaverse. He said he thinks such partnerships are important because they suggested the companies believe that different systems should connect with each other.

But he added that many people doubt that the different systems will be able to connect. He noted that Microsoft and Meta compete on several products related to extended reality.

Days before its launch, Meta showed reporters the kind of users it wanted to appeal to. It showed apps like Tribe XR, a virtual training environment for DJs.

Tribe XR is a program already available in virtual reality, but a demonstration showed how passthrough technology may give DJs a way to use the app to perform in the real world. With the new technology, they can look out past their virtual equipment and see real partygoers.

Meta said it wants the device to be sold as an additional tool rather than as a replacement for the entry-level Quest 2, which costs $400.

For now, Quest Pro does not have the complex programs linked to it. Observers say Meta might want its metaverse technology to support it.

The company is still working on a mixed reality experience for its Horizon Workrooms app that would make a person's avatar appear to be present in a real-world conference room with other users, which Meta is calling Magic Rooms.

The Quest Pro is less costly than existing business devices like Microsoft's HoloLens 2. It became available for business use in 2019 and is already present in operating rooms and in factories.

virtual –adj. an imitation of reality or something real

headset –n. an electronic device worn on the head that plays pictures and sounds for the user

overlaid –adj. added on top of something

immersive –adj. surrounding something or someone and engaging all of a person's senses

avatar -n. an virtual representation or substitute of a person or character

category –n. a group of things that are similar in some way

3D (three dimensional) –adj. having, or appearing to have, width, height and length

DJ (disc jockey) -n. (Abrev.) a person who plays and mixes recorded music at concerts or other live events