Update Required To play the media you will need to either update your browser to a recent version or update your Flash plugin.
By VOA
05 January, 2017

And in November, U.S. Housing and Urban Development Secretary Julian Castro announced that smoking will become illegal at all public housing over the next 18 months. The federal housing department has over one million homes. 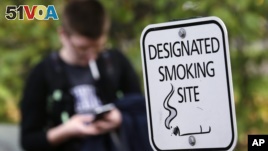 "Every child deserves to grow up in a safe, healthy home free from harmful second-hand cigarette smoke," Castro said.

The move to ban smoking at public housing units and college campuses follows approval of state laws banning smoking at most workplaces.

The Campaign for Tobacco Free Kids reports that 27 American states ban smoking in all indoor workplaces, including restaurants. California became the first state to ban smoking at most workplaces in 1995.

Thirty-two countries had banned smoking at most workplaces as of 2012, the Tobacco Atlas reports.

Those supporting smoke-free workplaces, public housing and college campuses give one major reason: the negative health effects of smoking.

The Centers for Disease Control [and Prevention] and the World Health Organization says the health effects of smoking are large. The CDC says cigarette smoking is the leading cause of "preventable deaths" in the United States. Smoking accounts for 480,000 deaths every year, it says.

Audrey Silk is founder of Citizens Lobbying Against Smoker Harassment. She wrote President-elect Donald Trump, asking him to stop the ban after he becomes president on January 20.

Silk says officials are going too far in trying to stop people from using a legal product.

She told Trump the new federal housing rule would force old or sick people to walk outside their homes to smoke, even when the weather is bad.

"At stake is the right of U.S. citizens to be left alone to engage in a legal activity in the privacy of one's own home," Silk said.

But supporters of smoking bans and smoke-free areas say the bad effects of second-hand smoke make it a public health issue. Some also say that college campuses are a good place to limit or ban smoking.

Gary Reedy is chief executive officer of the American Cancer Society, which recently announced anti-smoking grants to 20 U.S. colleges. He said it is important to stop college students from smoking, "to be successful in creating a tobacco-free generation."

The Centers for Disease Control and Prevention estimates that 13 percent of adults between the ages of 18 and 24 smoke cigarettes. Reedy said that reducing the number of college students who smoke can lead to reduced smoking rates among older adults.

His reasoning? Once a person starts smoking, it is hard to stop, Reedy says.

The CVS Health Foundation is providing $3.6 million for the anti-smoking grants. The foundation was started by the American drug store company CVS.

The American Cancer Society says about one third of America's 4,700 college campuses are already smoke-free.

Thomas Gibson is vice president for student affairs at Bowling Green State University in Ohio. The school is one of the grant winners. He said Bowling Green wants to help urge students to not start smoking.

For those students who already smoke, the school wants to help them stop, he said.

cigarette – n. a small roll of paper that is filled with cut tobacco and smoked

campus – n. the area and buildings around a university, college, school

deserve – v. used to say that someone should get or have something

stake – n. an interest or degree of involvement in something

engage – v. to do something

grant – n. money provided for some activity or purpose