Update Required To play the media you will need to either update your browser to a recent version or update your Flash plugin.
By Caty Weaver
18 December, 2018


Penny Marshall, the celebrated director of beloved films like Big and A League of Their Own, has died. She was 75 years old.

Marshall died in her Los Angeles home on Monday night from problems linked to diabetes.

"Our family is heartbroken," the Marshall family said in a statement.

Marshall first found fame on the television show Laverne & Shirley, which ran from 1976 to 1983. She played Laverne DeFazio, a loud, Bronx-born young adult living in a Midwestern city. Cindy Williams played her friend Shirley. The hit series centered on working-class women, a rarity in television at the time. 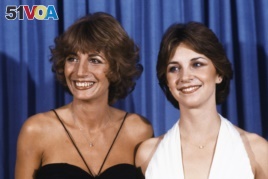 In her 2012 book, My Mother Was Nuts, Marshall offered her reasoning for the popularity of the show: "I thought it was simply because Laverne and Shirley were poor and there were no poor people on TV, but there were plenty of them sitting at home and watching TV."

Penny Marshall directed several episodes of the show. Those episodes helped launch Marshall as a filmmaker. Her first film as director was Jumpin' Jack Flash, a 1986 comedy starring Whoopi Goldberg.

Jumpin' Jack Flash did reasonably well in earnings. But next came a project that made Marshall the first woman to direct a film that earned more than $100 million: her 1988 hit comedy Big, starring Tom Hanks. Big was about a 12-year-old boy who wakes up in the body of a 30-year-old man. The movie received two Academy Award nominations and earned $151 million worldwide.

Marshall reteamed with Hanks for A League of Their Own. The 1992 comedy film told the story of professional women baseball players during World War Two. The movie also earned more than $100 million.

A League of Their Own and Big ensured Marshall's place in late 1980s and early 1990s Hollywood. Big's piano dance scene at the FAO Schwartz toy store in New York became iconic.

Hanks' line, "There's no crying in baseball!" from A League of Their Own, continues to be said on baseball fields everywhere.

On Tuesday, Marshall's passing was felt across the film, television and comedy industries. Movie writer James L. Brooks praised her for making films that celebrated humans and for her guiding influence to young comedians and writers.

Marshall's early success in a field where few women rose so high made her an inspiration to other female filmmakers. Ava DuVernay, one of the first women of color to direct big-budget movies, said Tuesday: "Thank you, Penny Marshall. For the trails you blazed. The laughs you gave. The hearts you warmed."

Carole Penny Marshall was born October 15, 1943, in the Bronx area of New York City. Her mother, Marjorie Marshall, was a dance teacher, and her father, Anthony, made industrial films. Their marriage was troubled. Her mother's sharp humor greatly influenced Marshall's development.

Marshall never again saw the same financial success of Big or A League of Their Own. Her final film as director was 2001's Riding in Cars With Boys, starring Drew Barrymore. Marshall also directed several television projects.

diabetes - n. a serious disease in which the body cannot properly control the amount of sugar in your blood because it does not have enough insulin

working class - n. the class of people who earn money by doing usually physical work and who are not rich or powerful

episode - n. a television show, radio show, etc., that is one part of a series

inspiration - n. something that makes someone want to do something or that gives someone an idea about what to do or create

sarcasm - n. the use of words that mean the opposite of what you really want to say especially in order to insult someone, to show irritation, or to be funny