Update Required To play the media you will need to either update your browser to a recent version or update your Flash plugin.
By Susan Shand
03 February 2021


Police in Myanmar announced their first charge against the country's ousted leader Aung San Suu Kyi, members of her political party said Wednesday. The military removed Suu Kyi from office in an overthrow Monday and restricted her to her home.

The military declared a one-year emergency rule after the overthrow. It accused Suu Kyi's government of not investigating reports of wrongdoing in recent elections. Suu Kyi's National League for Democracy, NLD, had won the election easily, with the military-backed party receiving little support.

NLD spokesman Kyi Toe confirmed the charge against Suu Kyi. If found guilty she could face up to three years in prison. Kyi Toe also said the country's former president, Win Myint, was charged with violating Myanmar's natural disaster management law. Both politicians can reportedly be detained until February 15.

"It was clear that the military were going to look for some legal cases against the leaders of the National League for Democracy and especially Aung San Suu Kyi to actually legitimize what they've tried to do," said Larry Jagan. He is an independent expert on Myanmar politics.

Police and court officials in the capital could not immediately be reached.

Also Wednesday, an unidentified NLD lawmaker told the Associated Press that hundreds of members of the ousted Parliament are under order to leave the capital within 24 hours. The lawmakers had been detained in government housing since the overthrow. 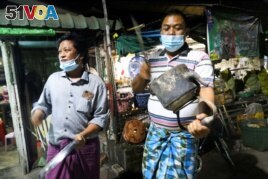 Local people bang pans the way they traditionally do it to drive away evil spirits, as they protest against military coup in Yangon, Myanmar February 3, 2021. REUTERS

The NLD has repeatedly called for nonviolent resistance since the overthrow. Many people in Yangon, Myanmar's largest city, protested in the night. Some people also demonstrated in support of military rule.

Suu Kyi is a Nobel Peace Prize winner and former political prisoner. The military rulers of Myanmar detained her for about 20 years as she pushed for democratic reform in Myanmar. After her political party won elections in 2015, she became the country's leader.

Suu Kyi worked with the generals who kept considerable governing power as democracy was established in the country. She received severe international criticism after she defended the military's campaign against Rohingya Muslims beginning in 2017.

The United States has threatened Myanmar with sanctions in reaction to the overthrow. The United Nations Security Council held an emergency meeting about the issue Tuesday.

Foreign ministers of the Group of Seven leading industrial nations released a statement Wednesday calling for the release of Suu Kyi and others. It also demanded that rule of Myanmar be returned to the democratically elected government.

General Min Aung Hlaing led the overthrow and declared himself Myanmar's new leader. On Tuesday, he said his government plans to investigate charges of voter wrongdoing in last year's elections, reported the state-run newspaper Global New Light of Myanmar. The country's election officials had found no major problems with the vote.

Experts have said that the strong NLD election victory may have frightened the generals.

General Min Aung Hlaing also said that COVID-19 containment measures taken by Suu Kyi's government would be continued. However, medical workers have announced that they will not work for the new military government.

Myanmar has confirmed more than 140,600 cases including some 3,100 deaths. Its health care system is one of the least developed in Asia, the United Nations says.

management - n. the process of dealing with or controlling things or people

actually - adv. as the truth or facts of a situation

sanctions – n. measures taken by a nation to coerce another to conform to an international agreement or norms of conduct, typically in the form of restrictions on trade