Update Required To play the media you will need to either update your browser to a recent version or update your Flash plugin.
By Pete Musto
08 April, 2018


The search for worlds orbiting distant stars will intensify in the coming weeks when the American space agency NASA launches a spacecraft.

Scientists hope the spacecraft will enlarge the known list of planets that they believe can support life as we know it.

The space agency plans to launch the Transiting Exoplanet Survey Satellite, or TESS, from the Cape Canaveral Air Force Station in Florida. NASA will be using a Falcon 9 rocket from a private company, SpaceX, to send TESS into Earth orbit. 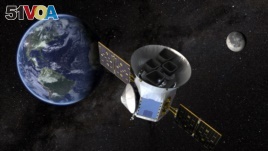 Officials say the launch could take place as soon as April 16. They expect the satellite's mission to last about two years and cost $337 million.

The latest NASA astrophysics effort is designed to build on the work of the Kepler space telescope. Scientists used the telescope to discover most of the almost 3,500 exoplanets documented during the past 20 years. Their discovery completely changed one of the newest fields in space science.

NASA researchers expect TESS to find thousands more formerly unknown worlds. They believe hundreds of these planets could be Earth-sized or "super-Earth"-sized — meaning they are no larger than twice as big as our home planet.

Experts believe such worlds hold the greatest chance of having rocky surfaces or oceans. This means they would be the most promising candidates for life, unlike large, gas-based planets similar to Jupiter or Neptune.

Astronomers said they hope to find about 100 more rocky exoplanets for future study.

The new satellite will take about 60 days to reach its special, first-of-a-kind orbit. This will send TESS between Earth and the moon every two and a half weeks.

Kepler's positioning system stopped working in 2013, about four years after its launch. Scientists found a way to keep the telescope operating. But it has now used nearly all of its fuel.

Paul Hertz, NASA's director of astrophysics, spoke to reporters in late March. He said, "It's perfect timing that we'll be launching TESS to continue the great activity of looking for planets around stars other than our sun and thinking about what it might mean for life in the universe."

TESS is about the size of a refrigerator. Its wings have equipment to collect energy from the sun. And it also carries four special cameras to examine 200,000 stars that are relatively near the sun. These are the brightest stars in the sky. TESS will seek to identify which have planets of their own.

Like Kepler, TESS will use a method called transit photometry to identify unknown planets. Researchers will look for periodic, repetitive decreases in the visible light from stars caused by planets passing in front of them.

But Kepler only looked for stars within a very small part of the sky. TESS will examine the majority of the sky for shorter periods. It will also direct much of its attention on stars called red dwarfs, which are smaller, cooler and longer-lived than our sun.

One reason it will do so is that red dwarfs are more likely to have Earth-sized, possibly rocky planets orbiting them, noted David Latham. He is the TESS science director for the Harvard-Smithsonian Center for Astrophysics. He noted such planets are possibly fertile ground for closer examination.

Latham said another reason red dwarfs are important is that they are smaller and their planets orbit more closely than the Earth does to the sun. So a decrease in light from a planet passing in front of a red dwarf is easier to detect than with a larger star.

"It's easier to find interesting planets around smaller stars," he said.

Measuring decreases in starlight can identify an exoplanet's size and orbital path. Further observations from ground telescopes can provide its mass, as well as its density and whether it is largely solid, liquid or gas.

Martin Still is the TESS program scientist for NASA. He said more than 50 rocky, Earth- or super-Earth-sized planets have been identified already. And NASA expects to increase that number through the new mission.

The most promising discoveries are to be examined by a new generation of larger, more powerful telescopes now under development. These will search for signs of water and "the kinds of gases in their atmospheres that on Earth are an indication of life," Hertz said.

"TESS itself will not be able to find life beyond Earth, but TESS will help us figure out where to point our larger telescopes," he said.

We want to hear from you. What kinds of planets do you think TESS will discover? How likely is it that TESS will lead scientists to find life on other worlds? Write to us in the Comments Section or on 51VOA.COM.

exoplanet – n. a planet that orbits a star outside the area of space that includes our sun and the planets moving around it

astrophysics – n. the scientific study of the physical and chemical properties and structures of stars, planets, and other objects in outer space

refrigerator – n. a device or room that is used to keep things such as food and drinks cold

detect – v. to discover or notice the presence of something that is hidden or hard to see, hear, or taste

indication – n. something such as a sign or signal that points out or shows something