Update Required To play the media you will need to either update your browser to a recent version or update your Flash plugin.
By Dan Friedell
04 October, 2017


Before last season, the National Basketball Association (or NBA) announced it had more international players than ever before.

And that number only continues to grow.

When the 2016-2017 season started, the NBA said it had 113 international players. They represented 41 countries and territories.

Many of the international players are European, African or Canadian. Some players are from South American countries such as Brazil and Argentina. 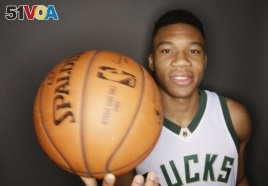 Giannis Antetokounmpo of the Milwaukee Bucks is from Greece. He is one of the best young players in the NBA.

The Utah Jazz had the most international players, with seven.

It is possible that the NBA will build on those numbers in the 2017-2018 season. For example, Lauri Markkanen of Finland and Frank Ntilikina of France were among the first 10 players chosen in the NBA draft. Players from Latvia, Germany and Slovenia were chosen later on.

The Washington Wizards are the NBA team based in Washington, D.C. The Wizards are no different than the other teams. They have players from France, Czech Republic and Poland. Another player was born to Nigerian parents in the American state of Maryland.

Ian Mahinmi of France plays center for the Wizards. His parents are from Jamaica and the West African nation of Benin.

As a boy, Mahinmi wanted to play soccer like Patrick Vieira, a member of the French national team. Vieira was born in Senegal and helped France win the World Cup championship in 1998.

But Ian Mahinmi grew too tall for soccer, so he gave basketball a try. Now, he is in his 10th season in the NBA.

He says, now, many young people in Europe and Africa dream of basketball. In the past, it was only soccer.

The NBA is doing its part to interest young people with exhibition games in Africa and China.

Mahinmi is working to spread the word about basketball, too. Last summer, he went to Benin and demonstrated basketball skills to 55 young players during a three-day event.

"The love that they showed me and the welcoming from the minute we got out [of] the plane until the last minute was tremendous. You know, this was probably the trip of the summer for me, my dad, probably the trip [of] our lives. So, you know, it's something we want to do every summer."

The visit to Africa was important for Mahinmi. But now that the Wizards are back together, preparing for the new season, he wants to help his team improve. Last year, the Wizards won 49 games, their best total since the late 1970s.

"I really feel like we are ready for the challenge," Mahinmi said. "It's going to be an exciting time."

What do you think of the international players in the NBA? We want to know. Write to us in the Comments Section or on 51VOA.COM.

center – n. someone who plays a middle position on a team in sports like basketball, hockey, football, and soccer