Update Required To play the media you will need to either update your browser to a recent version or update your Flash plugin.
By Ashley Thompson
02 October, 2019


A New York Times report says that the American president has suggested unusual, and even illegal, methods for preventing illegal immigration at the southern border.

Among Donald Trump's reported proposals was a waterway along the U.S. border with Mexico that could be filled with dangerous animals like alligators and snakes.

The newspaper also says the president suggested that American soldiers shoot migrants in the legs if they try to enter the US. Members of the president's staff reportedly advised the president that such acts would be illegal. 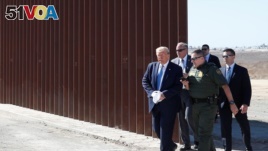 The article was adapted from a new book by two New York Times reporters, called "Border Wars: Inside Trump's Assault on Immigration."

The Times says it based its story on interviews with more than 10 White House officials. Those officials met with Trump to discuss ways to stop illegal migration from Central America.

The story centers on a meeting in March at the White House. During the meeting, Trump ordered the closure of the 3,200-kilometer long border with Mexico by the middle of the following day.

White House aides and advisors, including his son-in-law Jared Kushner and former Homeland Security Secretary Kirstjen Nielsen, tried to talk the president out of it.

Trump is reported as shouting to those in attendance, "You're making me look like an idiot...I ran on this. It's my issue." As a presidential candidate, Trump promised to build a wall along the U.S.-Mexico border.

The Times reports it took almost a week for aides to talk him out of the idea, saying it would be economically destructive.

On Wednesday, the President made note of the report on Twitter, writing, "I may be tough on border security, but not that tough. The press has gone crazy. Fake News!"

Trump returned to the issue later at a press appearance with the president of Finland. "Never said it...never thought of it," Trump said of the statements attributed to him in the New York Times story.

Trump also mistakenly blamed the Washington Post and two of its reporters for the news story and book. He then condemned the Post as corrupt and a "disgrace."

He described the story as "a total lie. It was corrupt reporting."

adapt - v. to change (a movie, book, play, etc.) so that it can be presented in another form

disgrace - n. the condition of feeling ashamed or of losing or becoming unworthy of respect or approval