Update Required To play the media you will need to either update your browser to a recent version or update your Flash plugin.
By John Russell
13 August 2021


A man's days living alone in the forest in the state of New Hampshire appear to be over. David Lidstone said he does not think he can return to his old way of living. The decision came after the cabin he lived in burned down not long ago.

Lidstone is also known as "River Dave." He had been living for 27 years in the area, but was ordered to leave in a recent court case.

In a discussion with The Associated Press (AP), Lidstone used the term hermit - a person who lives in a simple way apart from others – to describe how he used to live.

"I don't see how I can go back to being a hermit because society is not going to allow it," Lidstone, age 81, said.

Lidstone cut his firewood and grew his food in the woods along the Merrimack River in the town of Canterbury. He built the cabin with his wife, from whom he is now separated, although he said they are still married.

He said he is not too sad about the loss of his life in isolation.

"Maybe the things I've been trying to avoid are the things that I really need in life," said Lidstone, who is not close with his family. 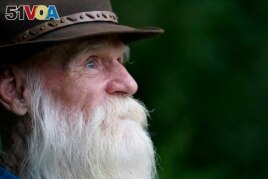 Lidstone did not want to say anything more about his family. Two of his three sons had told the AP that they had not been in touch with their father recently. His daughter did not respond to a message asking for a comment.

On July 15, Lidstone was jailed and told he would be released if he agreed to leave the cabin. The action followed a land dispute that goes back to 2016. The landowner, 86-year-old Leonard Giles, of South Burlington, Vermont, wanted Lidstone off his land.

The land is undeveloped and mostly used for wood cutting. It has been owned by the same family since 1963.

Lidstone had said an earlier owner in the family gave his word years ago that he could live there. But Lidstone had no written agreement. He later disputed that he was even on the land owned by the family.

In a recent court case, both sides agreed to allow Lidstone to collect his cats and chickens and remaining possessions. Some items had been given to police to keep safe. Lidstone, who still believes he was not on Giles' land, also was given permission to hire a surveyor to give him "peace of mind," Judge Andrew Schulman said.

A fire destroyed the cabin on August 4. The fire happened hours after Lidstone defended himself during a court hearing. He was released from jail the next day after the judge ruled that he would have less reason to return to "this particular place in the woods."

Canterbury Fire Chief Michael Gamache said that while the investigation is not over, the fire was likely caused by accident. "Right now, there's nothing left to go on at the site," Gamache said.

Meanwhile, many people across the United States and in other countries have offered to help Lidstone. They have offered to help raise money or offered him a place to live. Lidstone said he is thankful for all the support. He is still trying to decide where he will go next. He would not mind staying in New Hampshire, where he has developed some strong connections.

Kathy McCormack reported on this story for the Associated Press. John Russell adapted it for Learning English. Mario Ritter, Jr. was the editor.

cabin –n. a small, simple house made of wood

allow –v. to permit; to let something happen

isolation – n. the state of being in a place or situation that is separate from others

surveyor – n. someone whose job is to measure and examine an area of land

particular –adj. a specific person or thing apart from others; something that is special

site –n. a place where something is

meanwhile – adv. at or during the same time