Update Required To play the media you will need to either update your browser to a recent version or update your Flash plugin.
By Gregory Stachel
24 April 2022


Similarities between formations on Europa and a landform in Greenland suggest Jupiter's moon may be able to support life.

The double ridges look like huge cuts across Europa's surface. They have two long mountain tops and a central valley between them. 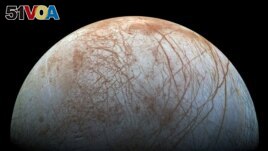 Stanford University geophysicist Riley Culberg is the lead writer of the study published in the publication Nature Communications. Describing the landforms, he said that if you cut through a double ridge, it would look like a capital "M."

Radar data showed that refreezing of liquid water below the surface of the ground drove the formation of Greenland's double ridge.

If Europa's formations were created the same way, it might mean there are large amounts of liquid water near Europa's surface. Liquid water is believed to be necessary for life to exist.

Europa has gained scientists' attention in the past as a possible place for life outside of Earth. That is because research has suggested that a saltwater ocean is under its ice-covered surface.

Smaller areas of water closer to the surface in the double ridges would represent a second possible place for small organisms to live.

"The presence of liquid water in the ice shell would suggest that exchange between the ocean and ice shell is common, which could be important for chemical cycling that would help support life," Culberg said. He added that surface-level water would be easier for future space missions to study than the deep ocean.

The U.S. space agency NASA is sending a space vehicle called Europa Clipper to Jupiter's moon. The launch is planned for 2024. Europa Clipper's goal is to study if the moon has conditions able to support life.

The water in the double ridges is within one kilometer of the surface. Those areas are near chemicals on the surface that could support the formation of life.

Europa is 3,100 kilometers across, a little smaller than Earth's moon. But Europa's ocean might contain two times the amount of water that is in Earth's oceans. Scientists believe that the first life on Earth was small organisms found in the ocean.

Europa's double ridges are sometimes hundreds of kilometers long. They are 150 to 200 meters tall, and the tops of the ridges are one half to one kilometer apart.

Scientists have debated how they formed. Culberg noticed their similarity to a landform he knew in northwestern Greenland.

Culberg said the Greenland double ridge formation was created by repeated refreezing, pressurization, and fracturing of a near-surface body of water. He added that there are two ridges because the near-surface water is also split into two bodies.

If the same process created Europa's double ridges, each near-surface body of water could have as much water as Lake Erie, one of North America's Great Lakes.

ridge – n. a long area of land that is on top of a mountain or hill

fracture – v. to cause a crack or break in (something hard, such as a bone)

habitability – n. able to be or possible to live in