Update Required To play the media you will need to either update your browser to a recent version or update your Flash plugin.
By Dan Friedell
13 April 2022


Methane is a natural gas that traps more heat in Earth's atmosphere than carbon dioxide. Farm animals, especially cows, and the decay of plant matter in wet areas, create the most methane.

Last week, American government researchers announced that methane levels in the atmosphere had increased by a record amount. The report from the National Oceanic and Atmospheric Administration (NOAA) noted that the record broken had been set only the year before.

Scientists measure methane in parts per billion, or ppb. 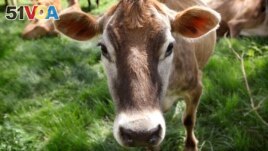 FILE - In this May 8, 2018, file photo, a Jersey cow feeds in a field on the Francis Thicke organic dairy farm in Fairfield, Iowa. Farm animals, especially cows, and the decay of plant matter in wet areas, create the most methane.

Before the world's developed nations started building large factories about 170 years ago, the methane level in the atmosphere was 720 parts per billion. Now, it is more than double that amount.

The United Nations' Intergovernmental Panel on Climate Change, or IPCC, said methane has contributed to about a one-half degree Celsius rise in temperature since the 1800s.

The main difference between methane and carbon dioxide is how long they last. Carbon dioxide can remain for thousands of years while methane disappears in about nine years.

As a result, many nations are trying to reduce methane emissions as a way to quickly slow the planet's warming. The goal is to prevent the world's temperature from rising more than 1.5 to 2 degrees Celsius by the end of this century.

Zeke Hausfather is a researcher for a climate science company called Berkeley Earth. He is concerned about the data from the last two years.

"We need to cut our methane emissions dramatically, and today we are clearly moving in the wrong direction," he said. However, he said cutting methane would "quickly cool the climate."

Lindsay Lan is an atmospheric scientist who works with NOAA and the University of Colorado. Lan said human activity is not the only reason for the rise in methane. She said it is also connected to the weather condition called La Nina, which changes the temperature of the Pacific Ocean. La Nina causes more rainfall, and some of the methane release has come from areas that are wetter than normal.

Lan said some scientists believed the recent increases may have been linked to COVID-19 and the changes it brought to human activities. But, her research suggests the pandemic had little effect.

Howarth said both fossil fuels and agriculture are critical to methane increases. But he said, "my research strongly points toward fossil fuels as being the largest cause of the increase since 2008...." And, Howarth blamed hydraulic fracturing, a method of pulling natural gas from the Earth, for much of the increase.

NOAA notes that about 30 percent of the methane in the atmosphere comes from businesses and human use of fossil fuels. That is the part that can most easily be reduced.

Lan did a study of the chemical makeup of the methane increases since 2006 and said most comes from natural emissions from plant material decaying or from agriculture.

In addition to the news about methane, NOAA said carbon dioxide levels are now about the same as they were 4.5 million years ago when seas were about 23 meters higher and the average temperature was warmer by about 3.9 degrees Celsius. Parts of the Arctic that are now frozen had large forests.

In a statement, NOAA's chief, Rick Spinrad, said "emissions continue to move in the wrong direction at a rapid pace."

Do you think we can reduce the levels of methane quickly enough to make a difference? Write to us in the Comments Section and visit 51VOA.COM.

disturb –v. to worry or upset someone

fossil fuel – n. fuel that is formed in the earth from dead plants or animals

decay – v. to be slowly destroyed by natural processes, broken down

rapid – adj. happening quickly or in a short amount of time

pace – n. the speed at which something moves