Update Required To play the media you will need to either update your browser to a recent version or update your Flash plugin.
By Faith Pirlo
12 April 2022


Dolphins are social and intelligent animals. And, like the way humans maintain relationships by hugging or giving a handshake, dolphins breathe together at the same time when they come up from the water for air. This shared act is important for creating social connections.

But sharing the same air and area is also spreading a contagious and deadly disease among the dolphins.

Janet Mann researches dolphins at Georgetown University in Washington, D.C. She and other scientists are trying to understand the virus. They discovered it in the water off the American states of Virginia and Maryland. It is now spreading to other Atlantic Coast dolphins. 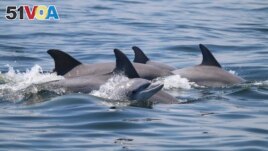 There was an outbreak of the virus from 2013 to 2015 when almost 20,000 dolphins died. About 2,000 dolphins washed up on the coast from Florida to New York. The total dolphin population was cut in half.

Mann explains that the dolphin virus is respiratory, or in the lungs, much like how the COVID virus spreads in humans.

"When dolphins breathe together at the surface, they're sharing respiratory droplets just like we do when we're talking or coughing on each other," she said.

Mann and other scientists, like Jacob Negrey, an animal virus researcher from the Wake Forest School of Medicine, are understanding the fast spread of the dolphin virus by following dolphin social activities.

They study not only the biology of the virus, but how weakened dolphin populations act together.

"Your friends...are also the individuals most likely to get you sick," Negrey said.

Since dolphins are very playful animals, they often swim so close that they touch fins, much like humans holding hands. They frequently swim in large "pods," or groups. During her 35 years of studying dolphins, Janet Mann has noticed that even though dolphins have close friends, they visit other dolphins and leave the pod often.

Following the social lives of dolphins in the Chesapeake Bay has permitted researchers to identify over 2,000 dolphin individuals. They can remember them by their special shapes and markings on their dorsal, or back, fins.

One morning, the scientists went out to the ocean from the Potomac River in a small boat. They looked for dark, colored objects right at the surface of the water. They can often see some movement in the water or can catch a look at a tail or fin.

Two of the researchers looked through special lens and saw two dolphins. Melissa Collier is a Georgetown biologist, and Ann-Marie Jacoby is an ocean scientist. They named the dolphins Abe Lincoln and Andrew Jackson. They are named for American presidents because the Potomac River runs through Washington, D.C.

"It's so nice to find dolphins that we know. These males have been seen together regularly (together) over the past year," said Jacoby.

A third dolphin, James Buchanan, joined his friends, Abe and Andrew. All three dolphins came to the surface of the water and breathed together. Collier said that the animals were close enough to share the virus when they breathed.

"This is typical, male behavior. The males stay pretty coordinated with each other. The females sync, but not as regularly. They sync mostly with their offspring," Mann says.

This behavior pattern might explain why more male dolphins have died in the most recent outbreak of the virus. The researchers are continuing to study this idea.

Outbreaks of this virus often occur every 25 years or so and can affect other animals that are similar to dolphins, like whales.

Kristi West is a researcher from the University of Hawaii. She said, "The disease becomes an even more significant threat when we combine it with other stressors that dolphins and whales throughout the world are facing."

Viruses are naturally occurring in the wild, but human activities in the ocean can make the virus worse by weakening environments and populations even more. Pollution from carbon and plastics, limited food sources, along with ocean warming from climate change, all harm the animals, Mann says.

Stressors weaken the dolphins' immune systems. "So, they are extremely vulnerable to virus outbreaks," Mann says.

The scientists hope their research can be used to help predict when other outbreaks might happen and use the information to bring policies forward in places where human activities are highest. This could mean reducing boat traffic or pollution when the virus happens again.

contagious – adj. easily able to be transferred from one to another

outbreak – n. a quick onset of disease in a portion of the population

fins – n. an extremity or limb of a water animal that helps them to swim

sync – v. to organize together at the same time

stressors – n. something that applies stress or strain on something else

What do you think of the social lives of dolphins and the virus? We want to hear from you. Write to us in the Comments Section.