Update Required To play the media you will need to either update your browser to a recent version or update your Flash plugin.
By Susan Shand
12 April 2020


Just weeks ago, many American cities and states were enforcing restrictions on the use of plastics in stores and restaurants.

Shoppers were required to bring reusable bags to food stores or pay a small amount of money to receive a bag. Restaurants in some areas were told not to use some plastic takeout containers.

The efforts are part of a widespread U.S. movement to remove one-use plastic bags from everyday life. But the COVID-19 pandemic has changed everything.

In just a few days, U.S. bans to reduce the use of plastics, mostly shopping bags, have been ignored by a public afraid of getting coronavirus.

Governors in Massachusetts and Illinois have banned or urged against the use of reusable cloth bags often brought to food stores. Oregon suspended its new ban on plastic bags this week. And cities from Bellingham, Washington, to Albuquerque, New Mexico, have announced a temporary halt on plastic bag bans as the coronavirus crisis continues.

There is an increase in takeout food and a ban on reusable cups and straws at the few coffee stores that remain open. Many environmentalists worry that COVID-19 could end their successful efforts to reduce plastic pollution.

"People are scared for their lives...the economy, feeding their loved ones, so the environment is taking a back seat," said Glen Quadros. He is owner of the Great American Diner & Bar in Seattle, Washington.

Quadros has lost 15 employees and seen a 60 percent decrease in business since Seattle shut down to slow the virus. Now, he is using biodegradable containers for takeout, but they are costly -- up to three times more than plastic. They are also getting difficult to find, he said, because of demand. 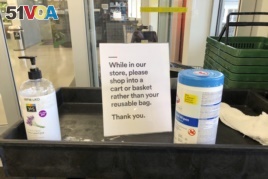 In this Sunday, March 29, 2020, photo, a sign posted at an entrance to a 365 Whole Foods store advises customers not to use their own bags while shopping in Lake Oswego, Ore. (AP Photo/Gillian Flaccus)

The plastics industry sees the current situation as a chance to get U.S. officials to reconsider the restrictions. The industry is asking states to remove bans on plastics by arguing that plastic one-use bags are safer in the current crisis.

The Plastics Industry Association recently sent a letter to Alex Azar. He is head of the U.S. Department of Health and Human Services. The association asked him to speak out against plastic bag bans, arguing that the rules are putting people at risk.

In Oregon, a union representing food store workers is asking the state government for a ban on reusable bags. A Chicago union called for an end "to the disease-transmitting bag tax."

Critics say people who use reusable bags do not often wash them.

A study by the U.S. National Institutes of Health found the virus can stay on plastics for up to three days. It also can stay on cardboard material for up to one day.

The Centers for Disease Control and Prevention says it appears possible for a person to get COVID-19 by touching something that has the virus on it and then touching their face. But experts have said that is not the main way the virus spreads.

More studies are needed to really know if reusable bags are in fact dangerous, says Dr. Jennifer Vines. She is the lead health official for Portland, Oregon.

Vines said that currently, it is not clear whether a virus found on a surface – including cloth or something else - can actually give someone the virus.

Some food stores are letting shoppers use their own bags if they put the food inside, so the worker does not have to touch the bag. Others have banned them.

Environmental groups have pushed back strongly against arguments by the plastics industry that banning one-use plastic bags could worsen the pandemic.

John Hocevar of Greenpeace USA said, "the movement... is not going to be that easy for the plastic industry to stop."

shopper – n. one who buys things in stores

pandemic – n. an illness that spreads around the world

cup – n. a thing to hold liquid to drink

biodegradable – adj. capable of being broken down into small parts by natural processes

cardboard – n. a thick, stiff paper that is used to make boxes