Update Required To play the media you will need to either update your browser to a recent version or update your Flash plugin.
By VOA
18 July, 2016


A former U.S. Marine has been identified as the gunman who killed three police officers Sunday in Baton Rouge, Louisiana.

The gunman was killed by police officers during the attack. Three other officers were injured. One remains in critical condition.

The suspect, Gavin Long of Kansas City, Missouri, turned 29 on Sunday. He was dressed in black and wearing a mask when he opened fire on officers with an assault rifle. 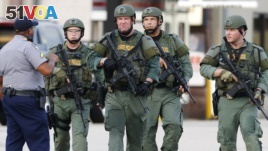 The officers were killed after responding to a report of a man carrying an assault weapon. Colonel Mike Edmonson is head of the Louisiana State Police. He said Monday the gunman ambushed officers and "certainly was seeking out police." He added: "His movements, his direction, his attention was on police officers."

In online writings, Long sometimes described violence as an answer to what he viewed as oppression of African Americans.

One post on Sunday to a Twitter account linked to Long read: "At what point do you stand up so that your people don't become the Native Americans...EXTINCT?"

The killings came about two weeks after police officers in Baton Rouge shot and killed a black man, 37-year-old Alton Sterling. The incident was captured on video and widely viewed on social media. Large protests against Sterling's killing followed in Baton Rouge, as well as several other U.S. cities.

Long, Sunday's shooter, was black. One of the officers he killed was black, the other two were white.

The Baton Rouge shootings came less than two weeks after five police officers were shot and killed in Dallas, Texas.

The Dallas killings happened during a peaceful demonstration to protest police shootings of black Americans. Police in the Dallas case said they believed the suspect acted alone. The gunman told police he was targeting white officers. He was killed in an explosion by a law enforcement robot.

U.S President Barack Obama and other officials attended a memorial for the slain officers in Dallas last week. Obama called for unity and urged Americans to channel their anger about police shootings and race into a search for peaceful solutions.

On Sunday, he also condemned the Baton Rouge killings. "The death of these three brave officers underscores the danger that police across the country confront every single day. We as a nation have to be loud and clear that nothing justifies violence against law enforcement. Attacks on police are an attack on all of us, and the rule of law that makes society possible."

He said the conventions can involve rhetoric that "tends to get hotter than usual." He urged candidates and their supporters to avoid "careless accusations" that could further heighten racial tensions.

Bryan Lynn adapted this VOANews.com story for Learning English. Additional information came from the Associated Press. Hai Do was the editor.

ambush – v. to attack by surprise from a hidden place

reassure – v. say or do something to remove someone's doubts or fears

rhetoric – n. language intended to influence people that may not be honest or reasonable