Experts: Population to Grow from 7 to 11 Billion

Update Required To play the media you will need to either update your browser to a recent version or update your Flash plugin.
By George Grow
23 September, 2014


Our planet is home to about seven billion people. Since the 1990s, population experts have predicted the number would grow to nine billion before it begins to slow down and possibly decrease.

But a new report predicts the world's population is likely to increase to almost 11-billion by 2100. The new estimates are based on the most modern statistical tools. They make use of government records and expert predictions about death rates, fertility rates and international migration, or people moving across borders.

During the rest of this century, Africa is likely to experience the largest increase in population. The report says Africa's population will grow from about 3.5 billion to 5.1 billion people over the next 85 years. 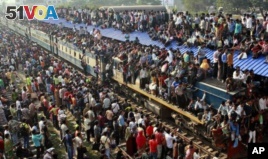 John Wilmoth is director of the United Nations Population Division. He says that in the past, researchers thought population growth in Africa would be similar to that of other areas. They expected slower growth rates as birth control use became more widespread. But he says those estimates were wrong.

The new findings are based on a joint research project of the United Nations and the University of Washington.

The researchers believe the population of Asia will reach five billion by 2050. That is up from the current 4.4-billion people.

The researchers also believe that North America, Europe, Latin America and the Caribbean area will have a total population of below one billion.

John Wilmoth says the pressure of feeding the rising population is likely to be less than might be expected.

"The relatively good news is that the world has been winning the race between population growth and food production. If you look back historically over the last 50 years, certainly for the world as a whole and for many, most individual countries and regions, the increase in food production has outpaced the increase of population."

The latest population estimates appear in a report published in Science magazine. The findings replace the most recent U.N. projections, which were released in July.

This report was based on a story from VOA reporter Jessica Berman. George Grow wrote it for Learning English. Caty Weaver was the editor.

population – n. all the people in a place, city or country

planet – n. a large object in space that orbits the sun

modern – adj. of the present or very recent time; the most improved

experience – v. to live through an event, situation or condition