Qataris Wonder Where to Stay during World Cup

Update Required To play the media you will need to either update your browser to a recent version or update your Flash plugin.
By Dan Novak
27 October 2022


Qatar is hosting the biggest sporting event in the world, the World Cup, next month.

Visitors to the Gulf Arab country will have many places to stay, including hotels, camps, and large ships. But the cost of housing has greatly increased for those who live in Qatar. Many can no longer pay for their own places.

"Landlords are taking full advantage of the situation and there's nothing in place to support the people who already live here," said Mariam. She is a 30-year-old British resident whose landlord did not renew her yearly contract in September. 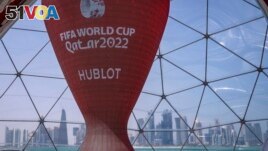 The landlord increased her monthly rent by four times — from about $1,370 to $5,490. Unable to pay for the increase, she had no choice but to move out.

Residents in Qatar are mostly from other countries. They say the rising demand and shortage of rooms ahead of the World Cup have led landlords to charge more for rent. Sometimes they are raising rent by over 40 percent on very short notice, forcing residents to move.

The Qatari government admitted there has been an increased demand for housing. It said residents who believe they have been wronged to bring the matter up with the government's rental disputes office.

About 1.2 million fans are expected to arrive next month for the World Cup.

Local officials say Qatar has set aside 130,000 rooms for visitors. They say the cost will start at around $80 a day. But it is not clear how many low-cost choices there are.

A price limit applies to 80 percent of the rooms, the government said in a statement to The Associated Press. It did not answer questions about whether and how the limit has been put into effect. The price limit can go as high as $780 for places to stay.

Many long-term residents say they are being driven out to make room for players, workers and fans during the event. Some said landlords posted signs saying their buildings have been "chosen by the government to host the 2022 World Cup guests and events." And they were ordered to leave ahead of the event.

Omar al-Jaber is the director of housing at Qatar's Supreme Committee of Delivery and Legacy. He said the government played no part in contracts that ended for long-term residents.

"To be honest with you, we are not controlling what happens in the market," he told the AP.

One woman said that when she signed her contract a year ago, her landlord promised he would not remove her during the World Cup. But just days before her contract was to be renewed, her landlord said he could not rent her the place for "personal reasons." The next day, the room was listed on Airbnb for nearly $600 more a month than she had paid.

"You're kicking out long-term residents for a one-month event?" she said. "People are angry. It's very disruptive."

Residents trying to find new homes because of the rent increases say it is nearly impossible to find places they can pay for. Most two-bedroom housings on the Pearl, a man-made island off the city of Doha, cost over $1,000 a night on Airbnb. The website also lists some places for $200,000 a month.

The government is hoping the first World Cup in the Arab world will be a celebration for Qatari citizens and foreign residents. But residents say the housing problem shows the event comes at a cost.

"It's costing me a lot of stress and money," said a British teacher who had to leave his place after seven years. "I'm having to pay for the World Cup."

host — n. a person who is entertaining guests socially or as a job

landlord — n. a person who owns a house, apartment, etc., and rents it to other people

advantage — n. something that helps to make someone or something better or more likely to succeed than others

rent— n. money that you pay in return for being able to use property and especially to live in an apartment, house, etc., that belongs to someone else

disrupt — v. to cause to be unable to continue in the normal way : to interrupt the normal progress or activity of (something)

stress — n. a state of mental tension and worry caused by problems in your life, work, etc.