Rare Moon Landing Video to Be Sold on 50th Anniversary

Update Required To play the media you will need to either update your browser to a recent version or update your Flash plugin.
By John Russell
09 July, 2019


Gary George was a college student when he bought reels of videotape from the United States space agency NASA at a government surplus auction in 1976. He spent $218 for more than 1,100 reels of tape.

It seems that George made a good investment. He might become a millionaire this month when the company Sotheby's auctions what it says is the only surviving original recording of man's first steps on the moon.

George is a 65-year-old retired mechanical engineer from Las Vegas. He spoke about the tapes in a phone interview with the Reuters news agency. George said, "I had no idea there was anything of value on them." He added, "I was selling them to TV stations just to record over."

But three of the tapes are valuable. They record the July 20, 1969 moon landing of the Apollo 11 mission.

George almost gave away the three moon videos. He was going to donate some of the tapes to a church. His father saw three tapes marked "Apollo 11 EVA." EVA is a term used by NASA that means extra vehicular activity.

"He [George's father] was really into the space program and he said, ‘I think I'd hang on to those. They might be valuable someday,'" George recalled. "So, for that very reason, I pulled them out and hauled them around the country for the next 43 years." 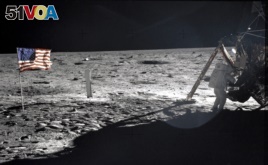 One of the videos has images of the first steps on the moon by astronaut Neil Armstrong. It includes his famous words, "That's one small step for man, one giant leap for mankind."

Another video shows astronaut Buzz Aldrin walking on the moon.

Freer said the tapes might sell for as much as $2 million when they go on auction on July 20: 50 years after the moon landing. She declined to give the financial terms between Sotheby's and the seller.

Collectors have paid large amounts of money for objects linked to space exploration. In 2017, Sotheby's sold a bag used by Armstrong on the 1969 mission. The price: $1.8 million dollars.

Barbara Goldberg reported on this story for Reuters. John Russell adapted her story for Learning English. Mario Ritter Jr. was the editor.

reel – n. an object that is used to hold and release film or tape

original –adj. made or produced first, not a copy

hang on to – phrasal verb - to keep (something)

haul – v. to move or carry (something) with effort