Update Required To play the media you will need to either update your browser to a recent version or update your Flash plugin.
By Gregory Stachel
01 January 2022


A recent survey found that at least 40 percent of media agencies in Afghanistan have disappeared since Taliban militants took control of the country.

More than 80 percent of women reporters have lost their jobs as well.

The group Reporters Without Borders, or RSF, led the study with its local partner, the Afghan Independent Journalists Association, or AIJA. It released updated findings on December 21. 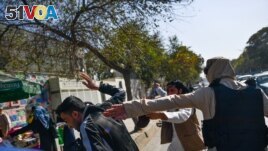 File - Taliban members violently attacked journalists during a restriction of media coverage during a women's rights protest in Kabul on October 21, 2021. (Photo by BULENT KILIC / AFP)

It said that the environment for reporters in the country has become "extremely fraught" since the Taliban took control on August 15.

The survey found, of the 543 media agencies in Afghanistan at the start of the summer, only 312 were still operating at the end of November. More than 6,400 reporters and media workers have lost their jobs since August 15.

The survey also found that 84 percent of women have lost their jobs compared to 52 percent of men.

There are no working women reporters in 15 of Afghanistan's 34 provinces. For example, the northern province of Jowzjan used to have 19 media agencies employing 112 women. The survey said, now, none of the 12 media agencies still operating is employing a woman.

The Taliban in many places have reportedly demanded that local media agencies not employ any women reporters.

Most of the Afghan provinces had at least 10 privately-owned media agencies just four months ago. Now, some areas have almost no local media.

The study found that the area of the capital Kabul has lost 51 percent of its media agencies. Of the 148 counted before August 15, only 72 are still operating. Of the 1,100 women reporters and media workers in Kabul at the start of August, only 320 are now working.

Hundreds of journalists have left Afghanistan out of fear of Taliban attacks or because of problems with working under Taliban rule.

The Taliban has issued a set of "journalism rules." They include requiring agreement with the Taliban's ideas about Islamic law.

The survey described the rules as dangerous. It said they open the way to speech restrictions and take away independence from journalists.

Taliban officials deny that they are behind cases of violence or media restrictions.

Reporters Without Borders quoted Taliban spokesman Zabihullah Mujahid who was asked about some 40 cases of violence against journalists since August 15. Mujahid said efforts are being made to train and control the actions of Taliban security forces.

Media agencies are not making money since the Taliban took control. That also has led to the reduction in media workers. Many agencies were receiving government and international money before the takeover.

"Beyond the numbers, the closure of nearly half of the country's media and the loss of more than 6,000 jobs are a disaster for press freedom," AIJA Executive-Director Hojatullah Mujadadi said.

Ayaz Gul reported this story for Voice of America. Gregory Stachel adapted it for VOA Learning English. Susan Shand was the editor.

fraught – adj. causing or having a lot of emotional stress or worry

journalism – n. the activity or job of collecting, writing, and editing news stories for newspapers, magazines, television, or radio