Update Required To play the media you will need to either update your browser to a recent version or update your Flash plugin.
By John Russell
25 September 2022


Researchers say top food businesses could lose 25 percent of their value by 2030 if they do not meet world climate goals. The study was presented recently at Climate Week New York, an event linked to the gathering of world leaders for the United Nations General Assembly.

The research comes from Race to Zero, a United Nations-backed campaign. It examined data on 40 big companies to estimate how they would be affected under different situations. For example, what would happen if governments ordered payments for carbon emissions; or if people reduce the amount of meat they buy on a usual basis.

The study found the companies' values could decrease by an average of around seven percent by 2030. That percentage would equal around $150 billion in investor losses. 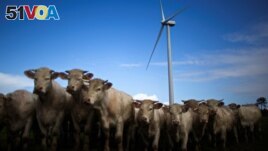 The report does not name the companies so it is not taken as investment advice, a Race to Zero spokesperson said.

Researchers used data from Vivid Economics, a division of McKinsey & Co, for the report.

Supporters said the findings show the importance of past demands for investors and companies to stop deforestation linked to products like cattle, palm oil and soy.

More than 100 world leaders last year promised to stop deforestation and land degradation and make repairs where needed by 2030.

Peter Harrison, chief executive of Schroders Plc, in a statement sent by a Race to Zero representative, said, "Nature risk is fast becoming" an important part of "investment risk."

Ross Kerber reported on this story for Reuters. John Russell adapted it for VOA Learning English.

degrade – v. to make the quality of (something) worse; to cause (something complex) to break down into simple substances or parts