Update Required To play the media you will need to either update your browser to a recent version or update your Flash plugin.
By Dan Novak
24 September 2022


Deadly diseases like measles, tetanus and whooping cough are on the rise in Ethiopia's Tigray area. Vaccination rates have fallen sharply there during the almost two-year-long civil war.

The percentage of children receiving usual vaccinations has fallen below 10 percent this year, data from the Tigray Health Bureau shows. That has undone years of government efforts to increase vaccination rates.

"The hopes of the children in the region to grow healthier and happier were snatched away in the blink of an eye," the agency wrote in a letter this month to the international vaccine group Gavi. 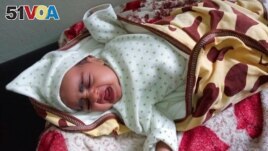 The letter said attacks on Tigray by Ethiopian government forces led to supply shortages that reduced the number of vaccinations. The Tigray agency also wrote that power outages have disrupted vaccine supply chains. The agency added that it is difficult for people in rural areas to get to health centers.

A ceasefire from March to late August made it possible for foreign medical aid to enter the area. But humanitarian access has been suspended since fighting began again, U.N. human rights experts said Monday.

The experts said in a report that they had reason to believe that the denial of access to healthcare and other aid by federal officials is a crime against humanity.

Ethiopian government officials did not immediately respond to requests for comment about the U.N. report.

The government has denied blocking aid and says the Tigray People's Liberation Front (TPLF), the party leading the area government, is responsible for the conflict. The fighting has killed thousands of civilians in Tigray.

Health Minister Lia Tadesse said vaccines had been provided to Tigray this year. She said that more were ready to be provided once conditions improved.

In its letter, the Tigray Health Bureau said the percentage of children receiving the full dosage of vaccines had dropped to very low levels.

The rate across Ethiopia was 65 percent in 2021, said the U.N. children's agency UNICEF.

The letter also reports a drop in percentages of children being vaccinated against tuberculosis and measles. The vaccination rate was above 90 percent in 2020 and is below 10 percent this year.

The letter said measles have spread in 10 of Tigray's 35 districts since the war began.

The nonprofit organization Gavi pays for and ships vaccines to developing countries. It said it had provided measles and COVID-19 vaccines during the ceasefire in Tigray, but that some activities had been suspended since fighting began again.

Ethiopia's Lia said 860,000 doses of measles vaccines were sent to Tigray last December and more doses were provided on April 2. And she said the U.N. World Food Program (WFP) is delaying a planned transport of humanitarian aid into Tigray.

But WFP spokesperson Claire Nevill said the agency was waiting on approval from Ethiopia's government.

Without the clearances, she said, "lifesaving humanitarian supplies, including food, nutrition and medical items, will have to be on hold."

region — n. a part of a country, of the world, etc., that is different or separate from other parts in some way

snatch — v. to take (something) quickly or eagerly

in the blink of an eye — n. very quickly

disrupt — v. to cause something to be unable to continue in the normal way

clearance — n. an official decision saying that someone has permission to do something

nutrition — n. the process of eating the right kind of food so you can grow properly and be healthy