Update Required To play the media you will need to either update your browser to a recent version or update your Flash plugin.
By Dan Friedell
28 September, 2016


Russian Hill is one of the highest points in the city of San Francisco.

And the neighborhood's name has a lot of history behind it.

Historian Andrew Zabegaylin says a Russian cemetery was once nearby. People discovered it in the early days of San Francisco, over 150 years ago. 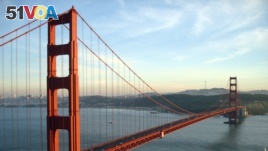 The Golden Gate Bridge in San Francisco, California at sunset.

That is when San Francisco was known for being the center of gold mining and trading in the United States.

Earlier in Northern California, traders and sailors from the Alaskan Russian American Company called San Francisco home. And that is where they were buried.

Some people call San Francisco "the Paris of the West." But it has more Russian than French influences.

For example, Holy Trinity Church was the first Russian church in the city. It opened in 1857 and was an important gathering place for Russian immigrants.

At the Holy Trinity Church, Saint Tikhon of Moscow once worked with worshippers. He became an American citizen in the early 1900s. Years later, he became Patriarch of the Russian Orthodox Church. He led the Church from 1917-1925.

San Francisco is also home to the Holy Virgin Cathedral. It is the largest Russian Orthodox church on the U.S. west coast.

A second group of Russian immigrants came to San Francisco after 1917, during Russia's civil war. Their legacy is still felt at the Russian Center. At the center, you can visit the Museum of Russian Culture.

Yves Franquien is the director of the museum. He said it is the largest Russian museum in the West.

"Many Russian immigrants from around the world donated their personal and family artifacts," Franquien said. "This is a museum which reflects Russian life before and during the Bolshevik revolution and reflects the life of San Francisco's Russian colony since the 1920s."

The Russian Center organizes events and classes for young people. They include kindergarten classes, dance classes and gymnastics. The center is also open to people who do not speak Russian.

Zoya Choglokova works at the center. She said the goal is not only to serve adults, but also help young people stay connected to their Russian roots.

Vadim Massalsky wrote this story for VOANews. Dan Friedell adapted it for Learning English. Caty Weaver was the editor.

Are you surprised San Francisco has so much Russian culture? We want to know. Write to us in the Comments Section or on 51VOA.COM.