‘American Troops’ in Russia Despite Tensions

Update Required To play the media you will need to either update your browser to a recent version or update your Flash plugin.
By Jim Dresbach
03 July, 2016

In Russia, the government often plays up past military victories as a show of national strength.

Recently, one group of Russians gathered in Moscow for a reenactment of the Western Front during World War II. 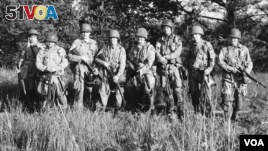 The Western Front was where the United States, Britain and their allies battled German-led forces for control of Western Europe.

For the military reenactment, about 100 Russians wore clothing like that worn by American and British soldiers during the war. As the "troops" moved forward, the only way to tell their nationality was when the "soldiers" spoke to each other in Russian.

The reenactors worked hard to make their military camp look like the 1940s camps did. Empty cans of food near the campfire had labels similar to those used in the war. Some were for products or companies that no longer exist. Nearby, an olive green radio played "The While Cliffs of Dover" and other popular songs of 70 years ago.

A man named Alexei played an American soldier during the reenactment. He said the hardest part for him was all the walking.

"Now we're going back," he said. "That's the real war. About an hour walking, then a few minutes of fighting, or no fighting at all, and we are going back."

He and the other Russians recreated historic battles with weapons that look real, but fire plastic pellets. The troops also had realistic-looking grenades and mortar launchers.

Maxim Afonin played the part of an American private named Max Garvel. "Reenactment for me it's like a sport. It's an active sport and some fun with my friends," he said.

"I don't care about politics, about why Germans are Germans," he added. "I mean, why Russian guys wear a German uniform. I don't care. It's like a cool game for friends."

The exercise gave the Russians a chance to use their English language skills.

Most reenactors choose to be part of the Soviet Red Army because it was a sign of loyalty to Russia. It also was easier. The Red Army clothing doesn't cost as much as the American or British uniforms. Recreating the western front also means having to order more costly, genuine military equipment.

In recent years, military tensions between Russia and the West have been rising. Some of the Western troop reenactors found themselves questioned by fellow Russians.

"At work, my colleagues have asked ‘why the American soldier?'" said Andrey Borovoy, who works as a dental technician.

"Well, at the moment the relations between our countries are not very good. But let's not mix up policy and history," he said. "History is history. We were allies in [the war]."

Daniel Schearf wrote this story for VOANews. Jim Dresbach adapted it for Learning English. George Grow was the editor.

re-enact – v. to repeat or replay the actions of an event

mortar – n. a military weapon used to fire shells high into the air at a low speed

label – n. a sign covering a bottle, can or box

uniform – n. a special kind of clothing that is worn by all the members of an organization