Update Required To play the media you will need to either update your browser to a recent version or update your Flash plugin.
By John Russell
25 April 2022


Scientists who study stars have detected a previously unknown kind of event called a micronova.

The event involves thermonuclear explosions that take place on a star called a white dwarf. The explosions happen because the white dwarf's gravity has pulled material from a companion star.

Astronomers said recently that a micronova is by far the least powerful kind of star explosion now known. 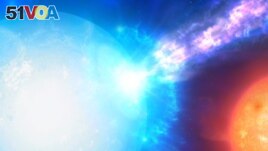 This artist's impression shows a two-star system, with a white dwarf (in the foreground) and a companion star (in the background), where stellar explosions called micronovae may occur. (Mark Garlick/European Southern Observatory/Handout via REUTERS)

Simone Scaringi of Durham University in England was the lead writer of the study that appeared in the publication Nature.

"The discovery was an unexpected surprise," Scaringi said. He added that finding these events "requires looking at the right place at the right time."

White dwarf stars are among the densest objects in the universe. They result from the collapse of a dying star's core. They have the mass of our sun but are about the size of Earth. Most stars, including the sun, will end their existence in this way.

Some white dwarfs are part of what is called a binary system, meaning that they are in an orbit with another star.

Micronovae happen in special binary systems with a white dwarf star possessing a strong magnetic field and a low-mass normal star. The white dwarf's gravity can pull hydrogen gas from the companion star's surface. The hydrogen then flows toward the white dwarf's magnetic poles.

At the white dwarf's poles, the pressure and temperature rise. This causes thermonuclear fusion that converts hydrogen into helium and releases energy.

"...This fusion is explosive, and the micronova occurs: a thermonuclear 'bomb' goes off," said astronomer Paul Groot who helped write the study.

The explosion is not widespread and does not destroy the white dwarf. In fact, micronova events can repeat many times.

"Only a very small percentage of the white dwarf participates in this explosion, roughly about one millionth of the surface area...this would be an area of about, say, the city of London," Groot added.

Each micronova event burns through material equal to one large asteroid, or just over one millionth of Earth's mass, Scaringi said.

A micronova is similar to a nova, a thermonuclear explosion involving a whole star. With novae, the white dwarf does not have a strong magnetic field, meaning that hydrogen stolen from the companion star is spread rather than staying at the poles. Novae can last for weeks or months, burning through about a million times more mass than micronovae, Scaringi said.

There are other kinds of star explosions as well. A kilonova takes place when two neutron stars or a neutron star and a black hole merge. A hypernova is a kind of supernova involving a large star exploding at the end of its life and collapsing to form a black hole. And a luminous red nova involves two stars merging.

Will Dunham reported on this story for Reuters. John Russell adapted it for Learning English.

thermonuclear – adj. Of or relating to transformations in the nuclei of atoms of low atomic weight (such as hydrogen)

companion – n. a celestial body that appears close to another but that may or may not be associated with it in space

astronomer –n. a scientist who studies stars, planets and objects in outer space

burst –n. a short period of producing something suddenly

merge – v. to become combined into one