Scientists Discover Ancient Turtle as Big as a Car

Update Required To play the media you will need to either update your browser to a recent version or update your Flash plugin.
By John Russell
24 November 2022


Scientists have discovered one of the largest turtles on record. The turtle, about the size of a small car, lived in Europe 83 million years ago.

Researchers recently described remains discovered in northeastern Spain. The remains belonged to a turtle named Leviathanochelys aenigmatica. It was about 3.7 meters long. It lived during the Cretaceous Period - the final time in the age of the dinosaurs. It is Europe's biggest-known turtle.

The ancient turtle was much larger than today's largest turtle - the leatherback, which can reach 2 meters long. Leviathanochelys nearly matched the largest turtle on record - Archelon, which lived roughly 70 million years ago and reached about 4.6 meters long. 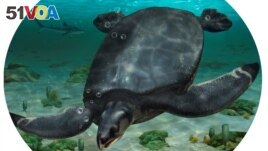 "Leviathanochelys was as long as a Mini Cooper while Archelon was the same size as a Toyota Corolla," said study co-writer Albert Sellés of the Institut Català de Paleontologia (ICP).

Leviathanochelys swam in dangerous waters. Its predators include mosasaurs and plesiosaurs, large water creatures up to 15 meters in length. Other nearby predators were sharks and rays.

"Attacking an animal of the size of Leviathanochelys possibly only could have been done by large predators in the marine context. At that time, the large marine predators in the European zone were mainly sharks and mosasaurs," said Oscar Castillo, a student at Universitat Autònoma de Barcelona and lead writer of the study that was published in Scientific Reports.

Castillo said during the Creataceous, marine turtles had increased body sizes. Leviathanochelys and Archelon could have been the biggest examples in this process. "The reason for this increase in body size" might have been "predatory pressures," Castillo said. But, he added, there might have been other causes at work.

Scientists found the Leviathanochelys remains near the village of Coll de Nargó in Catalonia's Alt Urgell area. A hiker in the Southern Pyrenees mountains saw the bones partially covered by the ground. To date, researchers have found parts of the back of the shell, and most of the pelvic area, but no skull, tail or limbs.

The bones suggest the creature had a smooth shell similar to leatherback turtles, with the shell itself about 2.35 meters long and 2.2 meters wide. Leviathanochelys appears built for the open ocean, returning to land only rarely - for instance to lay eggs.

The presence of a couple of bony areas on the front side of the pelvis differs from any other known sea turtle, suggesting that Leviathanochelys represents a newly discovered lineage – a scientific term meaning series of organisms connected by a continuous line of descent.

Leviathanochelys aenigmatica means "enigmatic leviathan turtle" owing to its large size and the curious shape of its pelvis that the researchers suspect was related to its breathing system.

turtle – n. a reptile that lives mostly in water and that has a hard shell which covers its body

pelvic – adj. relating to or located in or near the pelvis

enigmatic – adj. full of mystery and difficult to understand

leviathan – n. something that is very large and powerful