Update Required To play the media you will need to either update your browser to a recent version or update your Flash plugin.
By Gregory Stachel
15 October 2022


Unlike the sun, about half of the stars in our Milky Way galaxy orbit another star in what is known as a binary system. The word "binary" means two.

Researchers recently described an unusual binary system in the science publication Nature. The two stars orbit each other every 51 minutes in one of the fastest orbital periods known for a rare kind of binary system.

The two stars are about 3,000 light years from Earth. One light year is the distance light travels in a year. 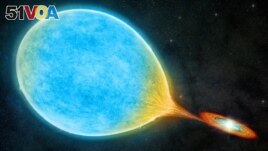 The system belongs to a kind of binary star known as cataclysmic variable. That term describes a star system that can brighten by as much as 10,000 times for short periods.

The unusual system includes a star similar to our sun orbiting very closely to what is called a white dwarf. A white dwarf is the hot and dense center of a burned out star.

Over billions of years, the distance between the two stars has decreased so much that they are now closer than the moon is to Earth.

Massachusetts Institute of Technology space scientist Kevin Burdge was lead writer of the study. He said, "Imagine if the moon zipped across the sky 10 times a night. That's the kind of speed we are talking about."

Because of the small distance between them, the white dwarf is taking material from the larger star.

The larger star is about the same temperature as the sun but it is now only the size of Jupiter, the largest planet in our solar system. The white dwarf has a mass equal to 56 percent of our own sun. It is extremely dense, however, because it is only 1.5 times the Earth's width.

Burdge said, "...when stars die of old age they become white dwarfs - but then this remnant began to eat its companion."

Burdge added that the white dwarf interrupted the normal development of the first star. He said the stars have been orbiting each other for 8 billion years.

The researchers used data from the Palomar Observatory in California and from telescopes in Hawaii and in the Canary Islands.

Stars are mostly made up of hydrogen, with smaller amounts of helium and other elements. In this system, the larger of the two stars has an unusually large amount of helium. Scientists say it lost hydrogen from its outer layers to the smaller white dwarf. At the same time, its hot center continues to make helium from existing hydrogen through the process of nuclear fusion.

The binary system periodically brightens by a huge amount partly because the larger star is being pulled out of its normal shape by the white dwarf's gravity.

There are more than a thousand known cataclysmic variables. Only 12 or so have orbital periods below 75 minutes. While the binary system's 51 minutes is quick, it is not the record when compared to other kinds of binaries.

"There is tons of wild stuff going on in space," noted Burdge.

galaxy --– n. any one of the very large groups of stars that make up the universe

burned out –v. (phrasal) to be burned or used up

remnant – n. the part of something that is left when the other parts are gone

companion –n. one of at least two stars orbiting in a binary or multiple star system

interrupt – v. to cause (something) to not be even or continuous