Update Required To play the media you will need to either update your browser to a recent version or update your Flash plugin.
By Anna Matteo
10 November 2021


The blue whale is the largest animal to ever live on our planet. You might wonder how much such a large creature eats. Well, you are not alone.

Scientists recently carried out a study to find out how much blue whales - and some of their closest relatives - eat in a day.

Their findings were not surprising. They found the whales eat a lot.

In just one day, blue whales living in the North Pacific Ocean can eat about 14.5 metric tons of krill. Krill are crustaceans and look like very small shrimp. That means blue whales eat around 1450 metric tons of food every year.

Matthew Savoca of Stanford University was the lead writer of the study, which appeared recently in the publication Nature. When speaking of the findings, Savoca said, "It's an unimaginable amount of food."

Nick Pyenson was the co-writer of the study. He said the amount of food blue whales eat in a day is about the weight of "one fully-loaded school bus."

Pyenson works at the Smithsonian Institution's National Museum of Natural History in Washington, D.C. He is an expert in the study of extinct marine mammals.

Savoca also described the blue whale's size as "unimaginable." Blue whales are larger than even the biggest dinosaurs. They can grow to 33 meters long and weigh about 181 metric tons. The animal can grow to about the size of a Boeing 737 airplane. 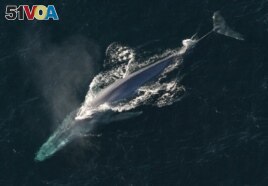 Blue whales are the largest creature to ever have lived on earth.

For the study, the researchers followed 321 whales living in the Atlantic, Pacific and Southern oceans. Some were blue whales. The rest were six other baleen whale species: humpback, fin, bowhead, right, Antarctic minke and Bryde's whales. These huge ocean mammals were found to eat up to three times more food than scientists had thought.

To measure the amount of food the whales ate and to study eating behaviors, the researchers used many devices. Electronic tag devices were attached to the animal's back. They also used cameras, microphones, a GPS locator device and an instrument that follows movement. They used drones to estimate the size of a whale's mouth area and how much food it could eat at one time. And they used instruments that recorded sound waves to estimate the amount of food in the waters near the whales.

Most baleen whales do not eat year-round. They eat about 100 days out of the year, mostly during the summer mating season. They eat very little the rest of the year.

There was another important part of the study: Knowing how much waste the whales excrete.

Because they eat so much, they also produce much more excrement, or waste material, than scientists had thought.

By eating so much and then producing waste material, baleen whales help nutrients stay on the sea surface. These nutrients help to form phytoplankton -- extremely small organisms that take in carbon. Phytoplankton serve as the base of ocean food webs.

He added that supporting whale recovery may help repair "ecosystem functions lost in the past hundred years."

Will Dunham reported this story for Reuters news agency. Anna Matteo adapted it for VOA Learning English. Ashley Thompson was the editor.

crustacean – n. a type of animal (such as a crab or lobster) that has several pairs of legs and a body made up of sections that are covered in a hard outer shell

marine – adj. of or relating to the sea

baleen – n. a tough material that hangs down from the upper jaw of whales without teeth and is used by the whale to filter small ocean animals out of seawater

locator – n. one that finds something (such as a mining claim or the course of a road)

excrete – v. to pass (waste matter) from the body or from an organ in the body

ecosystem – n. the whole group of living and nonliving things that make up an environment and affect each other

function – n. the action for which a person or thing is designed or used