Second Texas Nurse with Ebola Flew on Plane on Monday

Update Required To play the media you will need to either update your browser to a recent version or update your Flash plugin.
By VOA
15 October, 2014


The second U.S. health care worker to have gotten the deadly Ebola virus flew on a commercial airplane just one day before feeling ill.

Amber Vinson, a nurse at Texas Health Presbyterian Hospital in Dallas, helped care for the first patient in the United States to test positive for Ebola, Thomas Eric Duncan.

Ms. Vinson flew on Oct. 13 from Cleveland, Ohio, to Dallas, Texas, on a Frontier Airlines flight. 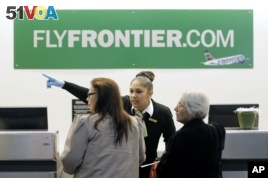 A Frontier Airlines employee wears gloves as she directs passengers where to go at Cleveland Hopkins International Airport . Ohio health officials aren't sure how many people came into contact with the Texas nurse who visited family in the state days before being diagnosed with Ebola.

Tom Frieden is the director of the U.S. Centers for Disease Control and Prevention. He said in a news conference on Wednesday that Ms. Vinson should not have been allowed to travel on a commercial airplane.

The CDC and the Frontier Airlines said they are contacting all 132 passengers who were on the same flight.

Ms. Vinson will be transferred from Texas Health Presbyterian Hospital in Dallas to Emory University Hospital in Atlanta, Georgia. The first nurse to test positive with Ebola, Nina Pham, is still at the Dallas hospital.

Dozens of children have been rescued in a raid on a sex trafficking ring in Colombia.

U.S. Immigration and Customs Enforcement officials announced Tuesday that they found 55 minors (under the age of 18) and arrested 12 people on Saturday. The U.S. officials worked with Colombian police in three cities: Armenia, Cartagena, and Medellin.

Eleven of the 12 men and women arrested are Colombian. The nationality of the other suspect has not been released.

Colombian media reported that one of those arrested is a beauty pageant star who worked with a modeling agency, where she allegedly recruited victims.

Colombia's Child Protective Services is now caring for the victims.

The State Department often warns U.S. diplomats in China about physical and electronic surveillance, and tells American citizens in that country to be aware of similar risks, especially in hotels.

commercial – adj. making or intended to make a profit

raid – n. a sudden attack carried out for the purpose of seizing or stealing something

ring – n. an exclusive group working for a selfish and often illegal purpose

recruit – v. to persuade (someone) to join you in some activity or to help you

surveillance – n. the act of carefully watching someone or something

envoy – n. a person who is sent by one government to represent it in dealing with another government