Should America’s Allies in Asia Have Nuclear Weapons?

Update Required To play the media you will need to either update your browser to a recent version or update your Flash plugin.
By Christopher Jones-Cruise
11 May, 2016

Such Americans could become more influential in U.S. politics if Donald Trump is elected president.

Trump has won the largest number of delegates in his attempt to become the Republican Party's presidential candidate. 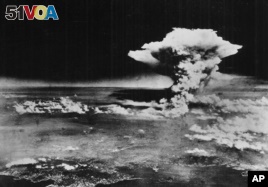 In this Aug. 6, 1945 photo released by the U.S. Army, a mushroom cloud billows about one hour after a nuclear bomb was detonated above Hiroshima.

During the campaign, he has suggested that Japan and South Korea should have the right to arm themselves with nuclear weapons. He has also said the U.S. should consider removing troops from countries that do not agree to pay more for the U.S. military bases on their territory.

This has led some people to question America's desire to guarantee security in East Asia. It has also strengthened the position of those who say America's Asian allies should have their own nuclear weapons to protect themselves.

Some observers say the United States would be in violation of the Nuclear Non-proliferation Treaty if it gave nuclear weapons to its allies. The treaty is designed to limit the spread of nuclear weapons.

Moon Keun-Sik works at the Korea Defense and Security Forum. He says, "If the U.S. allies defend themselves as Trump has said, the alliance will be broken, and it will lead to a nuclear domino (effect) in Asia."

In the 1960s and 1970s, conservatives in Japan and South Korea sought to develop nuclear weapons in the two countries. They were worried about their security because China had developed nuclear weapons. Their worries have increased because of North Korea's nuclear activities. But the United States has been able to persuade its allies in Asia to stay under the protection of the American "nuclear umbrella."

However, Trump's threat to remove U.S. troops from Asia could increase the power of minority voices in Japan's Parliament and South Korea's National Assembly. Those lawmakers say their countries should not depend on the United States for protection.

In January, North Korea conducted its fourth nuclear test. Reaction came quickly from Won Yoo-chul, the South Korean National Assembly floor leader for the ruling party. He said, "in the face of the North's fearsome, destructive nuclear weaponry, the time has come for us to have a peaceful nuclear program for self-defense."

Hiroshi Nunokawais teaches at Hiroshima University in Japan. He said, "If Trump's statements become a reality, there will be politicians that will agree and a lot will be enthusiastic, I believe."

Takashi Hiraoka is a peace activist and a former mayor of Hiroshima -- the first city to be attacked by a nuclear weapon.

He said that if Trump "becomes president, he has to take responsibility for the fate of humankind. He cannot avoid the dangers associated with nuclear weapons."

Arming South Korea and Japan with nuclear weapons would likely increase tensions in East Asia. It would also end any support from China and Russia for international action as a way to pressure North Korea to end its nuclear program.

While Trump is just a candidate and not yet president, his words are having an effect in Asia. Some people believe what he says could weaken the trust people have in America's commitment to the area, even if Trump does not intend for that to be the result of his statements.

Daniel Pinkston teaches international relations at Troy University in Seoul. He says "these types of statements and behavior are already doing damage. It is already undermining confidence of the U.S. in East Asia, and in Japan and South Korea in particular."

VOA's Brian Padden reported this story from Seoul. Producer Youmi Kim in Seoul contributed to the report. Christopher Jones-Cruise adapted the report for Learning English. George Grow was the editor.

domino effect – n. a situation in which one event causes a series of (sometimes similar) events to happen one after another

conduct – n. to plan and do (something, such as an activity)

commitment – n. the attitude of someone who works very hard to do or support something; a promise to do or give something

undermine – v. to make (someone or something) weaker or less effective, often in a secret or gradual way