Update Required To play the media you will need to either update your browser to a recent version or update your Flash plugin.
By Bryan Lynn
27 April 2022


The COVID-19 pandemic led to a rise in business for home delivery services. But some of the companies are now facing financial struggles in a highly competitive market.

Today, there are delivery services that offer a wide range of products – including full restaurant meals, groceries, coffee, medicines and just about anything else.

Many services offer delivery in 30 minutes or less. Some promise orders in as little as 15 minutes. They generally deliver from small storage centers in large population areas. 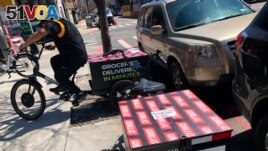 A worker sets to make a delivery on a bicycle in front of Gorillas mini-warehouse in the Williamsburg section of the Brooklyn borough of New York on Monday, April 12, 2022. (AP Photo/Tali Arbel)

Financial experts say it is difficult for such companies to make a profit. And officials in some American and European cities have already criticized how some of the companies operate and have proposed legislative action to govern them.

Marc-Andre Kamel is a partner at U.S. investment company Bain. He recently wrote an industry report on the online grocery market. Kamel told The Associated Press he thinks some of the investors get too caught up in the popularity of delivery and the huge valuations of their companies without making any money.

"At some point they will have to find a path to profitability," he said.

Some services are already shutting down. One, 1520, closed in late December, and two more, Buyk and Fridge No More, stopped in March. Buyk's Russian founders reportedly could not provide financing because of restrictions against Russia for its invasion of Ukraine. The business did not answer questions from the AP about the company.

Fridge No More said in a message on Twitter that it was closing after two years because of "growing competition and other industry related issues."

Len Sherman is a professor of business at Columbia University in New York. He said many of those companies do not have a lasting business model. "There is going to be a lot of consolidation on some very painful terms," Sherman said.

Getir is a Turkish delivery service that operates in Europe as well as Boston, Chicago and New York. It sees a path to profitability by adding more storage spaces in cities where it delivers. "We're here for the long term," said Langston Dugger, Getir's head of U.S. operations.

Getir recently raised $768 million, valuing the company at close to $12 billion. It has plans to expand in the U.S. Dugger described its users as people "ordering a late night ice cream, to somebody who is doing a full grocery shop for the week for a family, and everything in between."

The smaller companies are also facing new competitive threats from established delivery companies. These include DoorDash, Grubhub, Uber and Instacart.

Lee Hnetinka started FastAF, a delivery company with a two-hour delivery model in New York, San Francisco and Los Angeles. He told the AP that for his company, profitability is "just not a priority" right now. He said he is more interested in investing in good customer experiences. He points to the experience of massive online seller Amazon, which he says was also not profitable in the beginning.

delivery – n. the transporting of things from one place to another

groceries – n. goods bought to be used in the home such as food and cleaning products

priority – n. something considered very important that must be dealt with before other things

customer – n. someone who buys goods and services from a business