US Businesses Give in to Worker Demands to Keep Employees

Update Required To play the media you will need to either update your browser to a recent version or update your Flash plugin.
By John Russell
30 October 2021


As many American businesses struggle to fill jobs, some have started negotiating demands that used to be non-negotiable for most hourly employees.

One of the top demands for many workers is scheduling – the days and times they spend on the job.

Hourly workers are now seeking more flexibility in their schedules. That means employees are pushing back against requirements to work weekends, late nights or holidays. 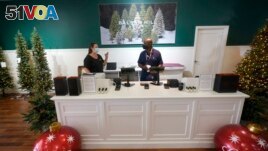 There are currently many job openings in the United States. So workers can be more careful about the jobs they choose.

There were 10.4 million job openings at the end of August and 11.1 million openings the month before. Those numbers are the highest since at least December 2000, when the government started recording the data. At the same time, the U.S. Labor Department said the number of people quitting their jobs jumped to 4.3 million in August from 4 million in July.

A recent study from employment company ManpowerGroup found that nearly 40 percent of jobseekers worldwide said schedule flexibility was one of their top three issues in career decisions.

SnagAJob.com, an online marketplace for hourly workers, says the word "flexibility" now appears in about 11 percent of the more than 7 million job postings on its site. That number was around 8 percent earlier in the year.

Instawork is an employment marketplace that connects local businesses with hourly workers. It says the rate at which employers were able to fill weekend schedules dropped from January through August compared with weekday work.

Such changes are happening as companies try to hire more workers for the upcoming holiday season. Target Corporation, for example, said this month it will pay $2 an hour more to employees who agree to work schedules during busy days of the holiday season.

Sumir Meghani is co-founder and CEO of Instawork. He told The Associated Press that he thinks companies are learning that money alone cannot solve their hiring issues.

"It's about flexibility," Meghani said. He added, "It's about workers saying ‘I don't want to work weekends' or ‘I can't work Mondays, Tuesdays and Wednesdays because I don't have child care or schools haven't reopened' or ‘I am worried about COVID.'"

Meghani says hourly workers are now asking how they can get the same work-life balance as workers in other kinds of jobs who can work remotely.

During the pandemic, hourly workers were hit especially hard when businesses like department stores and restaurants were forced to close for a few months during the spring of 2020. Those who remained employed at essential businesses like grocery stores found themselves working too much and too hard.

Donald Minerva is the owner of a restaurant called Scottadito Osteria Toscana in Brooklyn, New York. He told the AP that right before the pandemic, he had 16 employees who worked different schedules at his restaurant, which was open six days a week. Now, Minerva has 14 workers and he keeps his restaurant open just five days a week with limited hours.

Minerva says 70 percent of his workers are from the pre-pandemic days and want to work 40 hours a week. But the new workers want more flexibility.

Anne D'Innocenzio reported on this story for the Associated Press. John Russell adapted it for Learning English. Bryan Lynn was the editor.

flexibility – n. The act of making something easily changed; being able to change or do different things

remotely – adv. far away or from a distance

juggle – n. the act of making changes to (something) in order to achieve a desired result