Southwest Airlines Pilot Praised for Her 'Nerves of Steel'

Update Required To play the media you will need to either update your browser to a recent version or update your Flash plugin.
By Ashley Thompson
18 April, 2018

An American pilot who made an emergency landing Tuesday after the plane lost an engine is being praised for her "nerves of steel."

The pilot, Tammie Jo Schults, was flying a Southwest Airlines plane from New York City to Dallas, Texas, when the engine blew and broke apart. She landed the plane safely in Philadelphia, Pennsylvania.

Sharp pieces of the engine struck and broke one of the plane's windows. One passenger died after being partly sucked out of the plane. That passenger, Jennifer Riordan, was sitting next to the window that broke.

Seven other people were hurt.

Schults, who is 56 years old, took the plane into a fast descent. Passengers used oxygen masks and prepared for the force of landing. 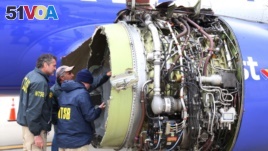 National Transportation Safety Board investigators examine damage to the engine of the Southwest Airlines plane that made an emergency landing at Philadelphia International Airport in Philadelphia, April 17, 2018. (NTSB via AP)

Schults' clear thinking during a high-pressure situation helped save many lives.

Schults is familiar with high-pressure situations. She got her first flying experience in the United States Navy, touching down fighter planes at speeds of 240 kilometers per hour.

She was one of the first female fighter pilots in the Navy.

As the Reuters news agency reports, Schults wanted to become a pilot from a young age. In a story on the fighter plane blog F-16.net, she said she tried to attend an aviation career day at her high school. But she was told they did not accept girls.

After serving in the Navy, Schuts joined Southwest Airlines as a pilot. She started working there in 1993.

On Tuesday, Schults calmly told air traffic control that part of her plane was missing, and that she would need emergency workers on the ground after she landed.

Passengers praised Schults for being calm and caring in an extremely difficult situation.

One passenger, Diana McBride Self, wrote on Facebook, "Tammie Jo Schults, the pilot came back to speak to each of us personally. This is a true American Hero...A huge thank you for her knowledge, guidance and bravery..."

Another passenger, Alfred Tumlinson, thanked Shults and her crew. He told the Associated Press, "She has nerves of steel. That lady, I applaud her. I'm going to send her a Christmas card...for getting me on the ground. She was awesome."

Ashley Thompson adapted this story for Learning English based on reports by the Associated Press and Reuters. Hai Do was the editor.

suck - v. to pull (something) with the force of moving water, air, etc.

descent - n. the act or process of going from a higher to a lower place or level

applaud - v. to express approval of or support for (something or someone)