What Are America's Favorite Dog Breeds?

Update Required To play the media you will need to either update your browser to a recent version or update your Flash plugin.
By Ashley Thompson
28 March, 2018

For the 27th year, the most popular purebred dog in America is the Labrador retriever.

But other breeds, or kinds of dogs, are quickly gaining in the chase for popularity, especially the French bulldog. Frenchies, as they are also called, are now the number-four dog in the country.

Coming in second is the German shepherd. The golden retriever is third. 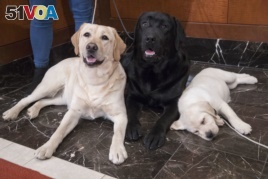 Also in the top 10 are the bulldog, beagle, poodle, Rottweiler, Yorkshire terrier and the German shorthaired pointer.

The lovable Lab has ruled as America's top dog longer than any other.

And the friendly beagle is the only dog that has made the AKC's top 10 list every year since the club's founding in 1884.

French bulldogs are wide and low to the ground. Their large ears and funny, flat noses have become favorites in big cities. Frenchies are generally small, quiet dogs.

Their rise in popularity has come in part from the breeds' inclusion in movies and advertisements. Many Hollywood stars also own Frenchies.

Frenchie lovers may like the growing interest in the breed, but they also worry about dishonest breeders and under-informed owners.

Kerry Boyd breeds Frenchies in the state of Massachusetts.

"It scares me that because it's popular, everybody wants it. But not every family is right for a French bulldog," she told the Associated Press.

The breed made news this month when a Frenchie puppy died on an airplane. An airline employee forced a passenger to put the dog into a small, closed baggage area. The death led to discussion of breathing problems common among breeds with especially flat noses.

Frenchies are also at risk of overheating and of having nose and mouth problems that require surgery. They also often must be born by cesarean section because of their big heads.

In 2015, New York's The Village Voice magazine published a cover of a photograph of a Frenchie. That cover said "Don't Buy This Dog."

Dr. John de Jong is an animal doctor in Massachusetts. He sees Frenchies' problems up close. But he notes that other breeds have conditions of their own.

"I would say to anybody purchasing a breed of any kind: Do their homework," says de Jong.

The AKC is the nation's oldest purebred dog registry.

The American Veterinary Medical Association estimates there are about 70 million pet dogs in the United States, and over 74 million pet cats.

purebred - adj. having parents that are of the same breed

ranking - n. a list of people or things that are ordered according to their quality, ability, size, etc.

passenger - n. a person who is traveling from one place to another in a car, bus, train, ship, airplane, etc., and who is not driving or working on it

baggage - n. the bags, suitcases, and personal things that a person carries when traveling

cesarean section - n. a surgical operation for giving birth in which a cut is made in the mother's body so that the baby can be removed through the opening

registry - n. a book or system for keeping an official list or record of items