Sridevi Wins Bollywood Award for Final Film Before Her Death

Update Required To play the media you will need to either update your browser to a recent version or update your Flash plugin.
By Ashley Thompson
25 June, 2018

The awards show, which ended on Sunday, is Bollywood's biggest event of the year. This year it took place in Bangkok, Thailand. 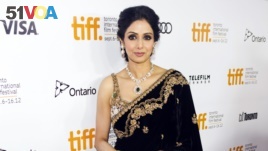 Sridevi arrives for the gala presentation of English Vinglish during the Toronto International Film, September 14, 2012, in Toronto, Canada. (REUTERS/Mark Blinch)

Sridevi received the best actress award for her final movie, Mom, a crime film that came out last year. She played a woman seeking justice after her stepdaughter was raped.

Sridevi was Bollywood's leading female actor in the 1980s and 1990s. She is considered the first female superstar in India's mostly male film industry.

She was reported to have accidentally drowned in February while in Dubai for a wedding. She was 54 years old.

Her husband, Bollywood film producer Boney Kapoor, accepted her award. He became emotional during the acceptance speech. "I miss her every moment of my life," he said.

His brother, Anil Kapoor, later came on stage to support him. Anil said of Sridevi, "The country, the world and our family misses you."

The leading film going into the award ceremony, "Tumhari Sulu," was named best picture prize. The film tells about a housewife who becomes a radio personality. It had seven total nominations.

Khan is best known internationally for his work in Jurassic World.

The IIFA awards are held each year in cities around the world. The event celebrates the Hindi-language film industry with awards and performances.

wedding - n. a ceremony at which two people are married to each other