Update Required To play the media you will need to either update your browser to a recent version or update your Flash plugin.
By Hai Do
18 May, 2018


This is What's Trending today ...

The great internet debate over "Laurel" versus "Yanny" continues.

Now United States government officials are commenting on the audio recording that is dividing people on social media.

Late Thursday, a White House-produced video appeared on the social media service Twitter. In it, President Donald Trump and members of his administration are asked whether they heard the name Laurel or Yanny. 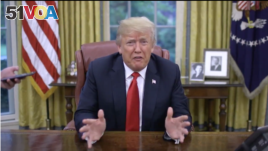 "So clearly Laurel" said Ivanka Trump, both an advisor to the president and his daughter. But Mercedes Schlapp, a communication director, disagreed. "Yanny's the winner; Laurel's the loser," she said.

White House advisor Kellyanne Conway first used the term "alternative facts" to explain differing opinions about crowd size at Trump's swearing in ceremony. When asked about what she heard in the audio, Conway said, "It's Laurel. But I could deflect and divert to Yanny if you need me to."

When asked about the social media debate, White House Press Secretary Sarah Huckerbee Sanders joked about the news media. Sanders said reports of her saying "Laurel" were "fake news". "All I hear is ‘Yanny,'" she added.

U.S. Vice President Mike Pence did not seem to be following the debate. "Who's Yanny?" he asked.

But President Trump had the last word. The video ends with him saying, "I hear covfefe."

Last May, Trump sent out a tweet about "constant negative press covfefe." His statement was retweeted and liked hundreds of thousands of times before it was removed without explanation.

versus - prep. used to indicate two people, teams, groups, etc. that are fighting or competing against each other

deflect - v. to cause something to change direction

fake - adj. not tru or real

constant - adj. happening all the time