Update Required To play the media you will need to either update your browser to a recent version or update your Flash plugin.
By Ashley Thompson
23 April, 2018

Another royal baby has arrived.

Kate, the Duchess of Cambridge, gave birth Monday to a healthy baby boy. It is the third child for her and her husband, Prince William.

The family's Kensington Palace's office announced the news. The palace said the baby was born at 11:01 a.m. or 10:01 UTC. He weighs 3.8 kilograms. The palace also noted that mother and child were both doing well.

The baby is a younger brother to 4-year-old Prince George and Princess Charlotte, who turns 3 next week.

Monday was also St. George's Day, England's national day. But the baby is unlikely to be given that name since his older brother already has it.

The baby was born at St. Mary's Hospital in London. Since early April, reporters and fans of the royal family had been set up outside the hospital waiting for news of the prince's birth. 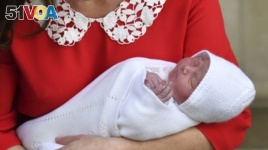 Britain's Prince William and Kate, Duchess of Cambridge with their newborn baby son as they leave the Lindo wing at St Mary's Hospital in London London, April 23, 2018.

John Loughrey is a longtime royal-watcher. He waited outside the hospital for two weeks. He said the baby would be "very good for our country and of course Her Majesty the queen."

British Prime Minister Theresa May congratulated the royal family on the birth. She wrote on Twitter, "My warmest congratulations to the Duke and Duchess of Cambridge on the birth of their baby boy. I wish them great happiness for the future."

The new baby is Queen Elizabeth II's sixth great-grandchild. He is fifth in line to the British throne, after grandfather Prince Charles, father Prince William and his two siblings.

Princess Charlotte is the first royal daughter to stay ahead of a younger brother in the line of succession. Before rules were changed in 2012, male heirs came first.

heir - n. a person who has the right to become a king or queen or to claim a title when the person holding it dies