Update Required To play the media you will need to either update your browser to a recent version or update your Flash plugin.
By Dan Friedell
28 March, 2016

Children carry baskets and collect eggs made of chocolate or candy. They search in the house, their yards or a park.

But one egg hunt on Saturday went wrong in the northeastern state of Connecticut.

A candy company hosted an egg hunt for children. The company is called PEZ, and it hid more than 9,000 eggs on its property in Connecticut. 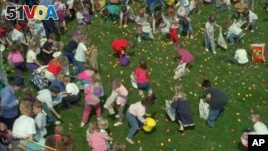 Children hunt for eggs Saturday, April 8, 1995, in New Berlin, Ill., during the "World's Largest Easter Egg Hunt" sponsored by Bank One and the Illinois Department of Children and Family Services. Children hurried around trying to find as many eggs as possible because prizes included a $1,000 U.S. Savings bond, a Bahama cruise and candy. (AP Photo/Judy Spencer)

But way more people showed up than the candy maker expected.

The egg hunt was set up on three separate fields, and children would be assigned to hunt for eggs based on their ages.

But Monday morning, stories reported parents going out of control at the hunt and made PEZ one of the top trending topics on Facebook.

It turns out the parents rushed on to the fields where the eggs were hidden. They said they were trying to get eggs for their children.

But instead, they left behind a lot of hurt feelings.

One 4-year-old boy told a local television station someone pushed him over and took his eggs. The boy's bucket for collecting eggs also broke.

One employee said the display of parents rushing onto the fields reminded him of locusts.

"We did our best," he said. "Unfortunately, it fell a little short."

Two PEZ pages on Facebook had comments from people saying the event was not organized well, while others said the parents overwhelmed an event designed for kids.

The company tried to make up for the chaos by giving people more candy as they were leaving the event, and passing out coupons for future purchases.

But in Washington, D.C., at the White House, the picture was very different. On Monday afternoon, President Barack Obama and first lady Michelle Obama hosted their Easter egg roll. It was the last before Obama leaves office after eight years.

The event featured thousands of people outside the White House who came to see the President and first lady read books to children, enjoy the grounds, play games and also roll eggs with long spoons. It is a tradition going back to the late 1800s.

What are some Easter traditions in your country? We want to know. Write to us in the Comments Section or on 51VOA.COM.

locusts –n. a type of grasshopper that travels in very large groups and that can cause great destruction by eating crops