Update Required To play the media you will need to either update your browser to a recent version or update your Flash plugin.
By Dan Friedell
23 March, 2016

"Batman vs. Superman: Dawn of Justice" is a movie a lot of people are excited about. 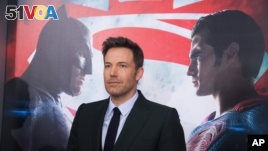 Even Wonder Woman is in the movie.

Since the Batman movie series started in 1989, movies with Batman have sold almost $2 billion of tickets in the U.S. That is according to the website Box Office Mojo.

The same site says since 1978, the six Superman movies have sold over $800 million in tickets.

So, the thinking goes, putting the two characters together, should result in a big movie.

But what happens if critics do not like it?

We will find out on Thursday night, when the film comes out in the U.S.

Some critics say the two-and-a-half-hour film is too long.

One critic from the magazine Us Weekly calls it "151 minutes of gloom and doom."

Another critic, Michael Phillips from the Chicago Tribune, says, "humankind deserves a better blockbuster." The headline of his article is "Yawn of Justice."

That is a play on words based on the movie's title, "Dawn of Justice."

Phillips writes about a scene with the famous Batmobile car, and calls it "empty noise," with "absolutely no rhythm."

Other reviewers say the film is "too serious."

But not every reviewer hates the film.

Scott Mendelson of Forbes says it is "one of the most visually beautiful comic book movies you have ever seen."

Will the negative reviews hurt the movie's profits? Will it keep fans away?

So far it looks like lots of fans ignored the reviews and purchased tickets in advance. The website The Wrap says 90 percent of the tickets sold for this weekend by a service called Fandango are for the movie.

Earlier this week, Deadline reported the film will sell $350 million of tickets worldwide this weekend. If that happens, it will be one of the largest openings ever.

Are you planning to see the Batman vs. Superman movie? If you go, add your review in the Comments Section or on 51VOA.COM.

gloom – n. darkness or a feeling of sadness

rhythm – n. a regular, repeated pattern of sounds or movements

dawn – n. the beginning of something; sunrise

yawn – n. used to describe something that is not exciting

play on words – n. the act of making a pun