Update Required To play the media you will need to either update your browser to a recent version or update your Flash plugin.
By Ashley Thompson
06 July, 2017

United States officials say an American company has agreed to surrender thousands of ancient artifacts from the Middle East.

The company also agreed to pay a $3 million fine to the government.

Federal prosecutors accused Hobby Lobby, a business specializing in arts and crafts, of illegally importing the artifacts into the country. 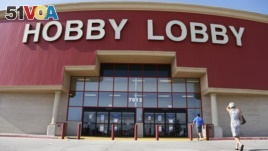 The government lawyers said in a court statement that Hobby Lobby paid $1.6 million in 2010 for over 5,000 earthen tablets and other objects. Many of the artifacts have examples of cuneiform, one of the earliest known systems of writing.

Federal prosecutors said an expert warned the company that the artifacts were likely stolen from archaeological areas in Iraq.

Importing Iraqi cultural property into the United States has been banned since 2004, the statement said. Under Iraqi law, all antiquities found in the country are considered property of the state. Private individuals cannot own them without permission from the Iraqi government.

The president of Hobby Lobby, Steve Green, said the company has cooperated with the U.S. government. He also said that the company should have "more carefully questioned" how the objects got into the country.

Green said Hobby Lobby did not purchase any items directly from dealers in Iraq. He said the company had worked with dealers in the United Arab Emirates. He also said that Hobby Lobby "condemns" such acts and has always acted with the aim of protecting "ancient items of cultural and historical importance."

On Thursday, "Hobby Lobby" trended worldwide on Twitter and Facebook. One writer said: "Hobby Lobby looting Iraq was not a story I was expecting but then again this is 2017."

The company has agreed to develop a new policy for buying cultural property. It has also agreed to provide reports to the government about such purchases for 18 months.

Hobby Lobby began starting a collection of historical Bibles and other artifacts in 2009. Its owners are known for having strong Christian beliefs.

Green himself owns one of the world's largest collections of religious artifacts. He is building a Museum of the Bible in Washington, D.C. The building is set to open later this year.

VOA News and the Associated Press reported this story. Ashley Thompson adapted it for Learning English. George Grow was the editor.

sample - n. a small amount of something that is given to people to try

archaeological - adj. related to archaeology, a science that deals with past human life and activities by studying the bones, tools, etc., of ancient people

loot - v. to steal things from (a place, such as a store or house) during a war or after destruction has been caused by fire, rioting, etc.