Update Required To play the media you will need to either update your browser to a recent version or update your Flash plugin.
By Ashley Thompson
05 May, 2016

The English rock band Radiohead once recorded a song called "How to Disappear Completely."

Earlier this week, the band appeared to have done just that. On Sunday, Radiohead slowly started to disappear from the Internet. Its Facebook posts and tweets were erased. The band's website went white.

Radiohead fans quickly began discussing the possibility of a new album. It would be the band's ninth studio album. 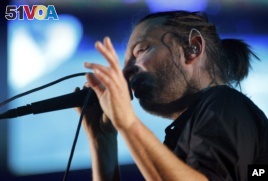 The video showed an animated bird made of clay. Later that day, it posted another video on Instagram of several animated clay people wearing masks, circling around a woman tied to a tree.

And then, finally, came a music video for the band's first new song in five years.

The song is called "Burn the Witch." Scenes from the short Instagram videos appear in the music video. It has already been viewed more than 7 million times on YouTube.

The video begins with a man arriving in a new town. At first, the town seems scenic and friendly. But the man begins to see strange things going on.

A woman then sets the whole thing on fire.

Fans immediately started trying to understand the meaning of the song and the music video.

She told Billboard that she believes the band wanted the video to bring attention to Europe's refugee crisis, especially the "blaming of different people...the blaming of Muslims and the negativity" in Europe.

clay – n. a heavy, sticky material from the earth that is made into different shapes and that becomes hard when it is baked or dried

animated – adj. produced by the creation of a series of drawings, pictures, etc., that are shown quickly one after another

negativity – n. an attitude in which someone considers only the bad qualities of someone or something