Update Required To play the media you will need to either update your browser to a recent version or update your Flash plugin.
By Anne Ball
28 July, 2017


In a change of leadership in the White House, President Donald Trump says retired General John Kelly is his new chief of staff.

Kelly is currently the secretary of Homeland Security. 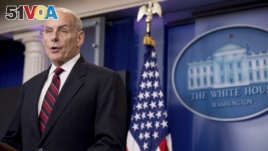 FILE - Homeland Security Secretary John Kelly talks to the media during the daily press briefing at the White House in Washington.

Trump wrote on Twitter: "I am pleased to inform you that I have just named General/Secretary John F Kelly as White House Chief of Staff. He is a Great American and a Great Leader."

Speaking to a crowd on Friday in Brentwood, New York, Trump called Kelly "one of our great stars." When Trump returned to Washington, he told reporters that John Kelly "will do a fantastic job" and is "respected by everybody."

The announcement comes after days of talk that Priebus no longer had the confidence of the president.

Kelly is a retired four-star Marine general. He is now the third general in Trump's group of top advisers. They include are National Security Adviser H.R. McMaster and Secretary of Defense Jim Mattis.

In an interview published Thursday evening in The New Yorker magazine, Scaramucci harshly criticized Priebus and said that he would "be asked to resign" from his job very soon. Some news reports said Priebus resigned from his position Thursday night.

Also this week, the U.S. Senate failed to pass the Republican-backed repeal of the Obamacare health care plan. Repealing and replacing the health care plan was a major Trump campaign promise.

Trump took office six months ago. He has had trouble turning some of his campaign promises into legislation.

Anne Ball wrote this story for Learning English based on materials from the Associated Press and VOA News. Ashley Thompson was the editor.

repeal - v. to officially make (a law) no longer valid