Update Required To play the media you will need to either update your browser to a recent version or update your Flash plugin.
By Jill Robbins
02 August, 2017


President Donald Trump gave his support Wednesday to a bill that would cut legal immigration to the United States by half.

The bill would reduce legal immigration to the U.S. from the current level of 1 million a year to 500,000 by the end of the 10th year.

It would also give a priority to immigrants based on their education, job offers, English-language skills, and success in creating businesses.

The bill is similar to proposals Trump made as a candidate for president. During the 2016 campaign, Trump often said immigration was costing Americans jobs and keeping pay down for those with jobs.

Republican Senators Tom Cotton of Arkansas and David Perdue of Georgia appeared with Trump at the White House to introduce the bill.

Trump said the bill he is supporting would help Americans better compete for jobs.

"Among those hit the hardest in recent years have been immigrants and, very importantly, minority workers competing for jobs against brand-new arrivals. And it has not been fair to our people, to our citizens, to our workers."

The bill would keep the current immigration preferences for spouses and young children of U.S. citizens and legal permanent residents. But it would do away with preferences for other relatives such as grandparents or adult children.

The bill would also end the Diversity Immigrant Visa program, known as "diversity lottery." The program was created to increase immigrants from countries underrepresented in the United States. Cotton said it has been poorly managed.

The bill would also limit the number of permanent refugees admitted to the U.S. to 50,000 a year. Cotton said that is in line with the 13-year average.

Passage of the immigration bill is far from a sure thing.

The bill would require passage in the House of Representatives and the Senate. In the Senate, the bill would need 60 out of 100 votes. That will be difficult given opposition from groups that see immigration as positive for America and for businesses that depend on immigrant workers.

Senator Lindsey Graham is a Republican from South Carolina. He tweeted that the proposed immigration bill would be bad for his state.

"If proposal were to become law... devastating to SC (South Carolina) economy which relies on this immigrant workforce." 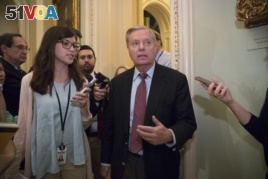 John Feinblatt is president of a group called New American Economy. It represents 500 mayors and business leaders who support legal immigration. He said cutting immigration in half would "result in fewer jobs for Americans."

But Senator Cotton said change is needed in a system that now brings one million immigrants to the U.S. each year.

Bruce Alpert reported on this story for VOA Learning English with additional sources from Reuters, the Associated Press, and VOA News. Hai Do was the editor.

diversity lottery - n. a drawing to select people with a goal of adding diversity or people from different countries

refugee - n. someone who has been forced to leave a country because of war or for religious or political reasons