US Officials Worry Condition Disabling Children May Be Spreading

Update Required To play the media you will need to either update your browser to a recent version or update your Flash plugin.
By Pete Musto
14 April, 2019


One morning last autumn, four-year-old Joey Wilcox did not feel right when he woke up. The boy had lost feeling on the left side of his face.

It was the first sign of a much more serious condition.

Three days later, Joey was in a hospital, unable to move his arms or legs or sit up. Tests failed to identify a cause. Doctors feared he might lose the ability to breathe.

"It's devastating," his father, Jeremy Wilcox of Virginia, told the Associated Press. "Your healthy child can catch a cold — and then become paralyzed."

Joey survived, but still suffers some of the effects. He was one of 228 confirmed victims of acute flaccid myelitis, known as AFM, in the United States last year.

AFM is a rare, mysterious and sometimes deadly paralyzing disorder. The number of cases seems to rise and then fall every other year. The condition is beginning to worry public health officials because it is striking more and more children.

Anthony Fauci is head of the U.S. government's National Institute of Allergy and Infectious Diseases. He said AFM appears similar to polio, another paralyzing disease. Polio affected only small numbers of people for centuries before it infected larger populations in the 19th and 20th centuries.

Fauci prepared a report about AFM that appeared earlier this month in the medical publication mBio.

Fauci said it is unlikely the disease will become as bad as polio, which struck tens of thousands of U.S. children every year before a vaccine became available in the 1950s. Yet he warned: "Don't assume that it's going to stay at a couple of hundred cases every other year."

AFM cases have been reported in other countries, including Canada, France, Britain and Norway. But the size and shape of the U.S. outbreaks seem very different. More than 550 Americans have been struck over the past 10 years. The oldest was 32 years old. More than 90 percent of the patients were children, most around four, five or six years of age.

Many had a higher than normal body temperature and what seemed like a common viral infection. They seemed to recover, but then developed paralysis. In some cases, it started in small ways — for example, a finger that suddenly would not move. Some went on to lose the ability to eat or breathe.

Many families say their children have regained at least some movement in affected body parts, but stories of complete recovery are unusual. Health officials cannot say how many recovered completely, partly or not at all, or how many have died. Yet the U.S. Centers for Disease Control and Prevention, or CDC, says deaths are rare. 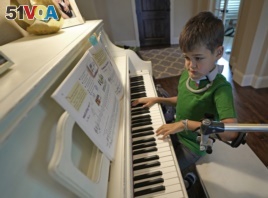 Braden Scott uses a device to support his left arm as he practices on the piano in Tomball, Texas on Friday, March 29, 2019. Braden was diagnosed with the syndrome called acute flaccid myelitis, or AFM, in 2016.

Scientists suspect the disorder is being caused mainly by a virus that experts identified more than 55 years ago. They believe the virus may have changed to become more dangerous, but have yet to prove that.

Doctors have been using a number of treatments, such as antiviral medications and antibiotics. But CDC officials say there is no clear evidence they work.

A growing number of experts agree that physical therapy does make a difference. A leading expert on the condition is Benjamin Greenberg of University of Texas Southwestern Medical Center in Dallas.

"These kids can continue to recover very slowly, year over year. ... It's driven by how much therapy they do," he noted.

Joey Wilcox's father said his son made huge improvements that way. Joey can run and use his arms. Still, the muscles in his right leg and shoulder are weak, and he still has left-side facial paralysis.

Other stories are tragic.

Katie Bustamante's son Alex developed AFM in 2016. The California woman realized something was wrong when she asked her son, then five years old, why he was not eating. Alex said that his thumb had stopped working.

That morning was the start of 17 months of hospital stays, operations, therapy, and struggles with healthcare providers to find a way to restore his breathing. It ended one morning last May, when Alex died of problems related to the disorder.

"I want them to research it and find the cause, and I want them to find a way to prevent it," she said. "This is growing. This shouldn't be happening."

More and more experts feel strongly that the main cause is an enterovirus called EV-D68. Enteroviruses are a large family of viruses, some of which, such as polio, can damage the central nervous system. Many others cause mild problems or none at all.

Researchers have found a link between cases of AFM and a rise in breathing disorders caused by EV-D68.

In the United States, doctors began reporting breathing conditions tied to EV-D68 in 1987. But that was usually no more than about 12 cases in any given year.

Then, in what may have been one of the first signs of an AFM outbreak, a 5-year-old boy in New Hampshire died in 2008. First, he developed sensitivity around his neck and a high body temperature, then weakened arms and deadened legs. The boy had EV-D68, and researchers linked his death to the virus.

The first real outbreak of AFM cases hit in 2014, when 120 were confirmed, with the largest numbers in California and Colorado.

CDC officials consider a health problem to be AFM based on exams and other evidence showing a special kind of damage to the spinal cord. Proof of an enterovirus infection is not required for a case to be counted, mainly because such evidence has been hard to come by. To date, CDC investigators have been able to find evidence of enteroviruses in the spinal fluid of only four of 558 confirmed cases.

Scientists are using more powerful spinal-fluid tests in hopes of better establishing the connection between AFM and EV-D68. That, in turn, could lead to more organized efforts on treatments and maybe even a vaccine.

Mike Stobbe reported this story for the Associated Press. Pete Musto adapted it for VOA Learning English. George Grow was the editor.

How soon do you think scientist might be able to find a treatment for AFM? We want to hear from you. Write to us in the Comments Section or on 51VOA.COM.

cold – n. a common illness that affects the nose, throat, and eyes and that usually causes coughing and sneezing

paralyzed – adj. a person or animal that is unable to move or feel all or part of the body

outbreak(s) – n. a sudden start or increase of fighting or disease

physical therapy – n. the treatment of a disease or an injury of the muscles or joints with massage, exercises and heat

sensitivity – n. the quality of being easily affected by something in a bad or unpleasant way

neck – n. the part of the body between the head and the upper chest

spinal cord – n. the large group of nerves which runs through the center of the spine and carries messages between the brain and the rest of the body