Update Required To play the media you will need to either update your browser to a recent version or update your Flash plugin.
By Hai Do
30 June 2022


The U.S. Supreme Court on Thursday established limits on the federal government's power to reduce carbon emissions from power plants.

The ruling immediately affects President Joe Biden's plans to deal with climate change by cutting the release of carbon gases into the atmosphere. It also raises new legal questions about government agencies' power to set rules and regulations.

Scientists say greenhouse gases, such as carbon dioxide, trap heat and cause the atmosphere to warm. 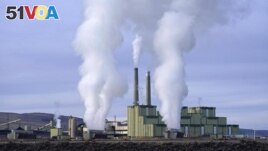 With Thursday's ruling, the high court overturned a lower court decision in 2021 that had struck down former President Donald Trump's Affordable Clean Energy rule. That regulation, which the Biden administration has said it does not want to keep, would set limits on the EPA's power to regulate emissions from existing power plants.

The Biden administration aims to cut the nation's greenhouse gas emissions in half by the end of 2030. It says it wants to have an emissions-free power industry by 2035. Power plants produce about 30 percent of carbon dioxide released in the U.S.

Chief Justice John Roberts wrote the majority opinion for the court. He wrote that the Clean Air Act does not give the EPA the power to place limits on emissions in the way it proposed. He said Congress must speak clearly on this subject.

"A decision of such magnitude and consequence rests with Congress itself, or an agency acting pursuant to a clear delegation from that representative body," he wrote.

Conservative activists have long supported measures to reduce agency power in what some called a "war on the administrative state." They want lawmakers in Congress to authorize action on issues of broad importance and societal impact.

In January, the conservative justices also blocked the Biden administration's vaccine policy for large businesses meant to deal with the COVID-19 pandemic.

In her dissent, Justice Elena Kagan said the majority's decision takes away the power that Congress gave the agency to deal with "the most pressing environmental challenge of our time."

Kagan added that the majority has a clear goal: "Prevent agencies from doing important work, even though that is what Congress directed."

The justices heard arguments in the case on February 28. That was the same day that a United Nations report warned that the effects of climate change are about to get much worse. It said the warming of the earth would likely make people sicker and hungrier in the coming years.

Schumer said, like the court's ruling on guns and abortions, Thursday's decision "will cause more needless deaths - in this instance because of more pollution that will exacerbate the climate crisis and make our air and water less clean and safe."

Senator Kevin Cramer, a Republican, praised the decision. He said the ruling restates that "Congress never intended the federal government to regulate greenhouse gas emissions for the states."

The decision was issued on the final day of rulings for the court's current term. The day also marked the swearing-in of Ketanji Brown Jackson, the first African-American woman on the Supreme Court.

Hai Do adapted this story for VOA Learning English from Associate Press and Reuters reports.

regulation –n. (usually pl.) an official rule or law that says how something should be done

pursuant to –prep. in a way that agrees with or follows something

authorize –v. to give legal or official approval

dissent –n. to publicly disagree with an official opinion, decision, or set of beliefs

exacerbate –v. to make a situation worse than it already is

intend –v. to have something in mind as a purpose or goal