Update Required To play the media you will need to either update your browser to a recent version or update your Flash plugin.
By Jonathan Evans
13 June, 2019

The program is called "Hebdomada Papae, Notitiae Vaticanae latine reddiate." In English, that means: "The Pope's week, Vatican news in the Latin language."

The broadcast is the latest effort to expand the use of Latin. The language of all Roman Catholic religious services, Latin was once an important part of Western European education.

The weekly Vatican Radio broadcast lasts five minutes. It will be followed by a 30-minute show with Latin conversation. 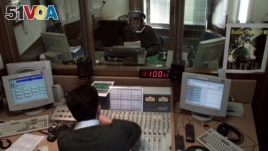 Andrea Tornielli is the lead director for Vatican communications. He said, "We wanted the official language of the Church to be experienced in news just as it is in the daily broadcast of a Mass in Latin."

The radio's news team, as well as the Vatican's Latin translation department, will produce the program.

Italian businessman Luca Desiata published a new book of crossword puzzles in Latin and ancient Greek this month. The publication is thought to be the first with no help or definitions in modern languages.

Desiata said the internet has helped renew interest in Latin as more and more schools around the world stop teaching it.

He told Reuters, "We now have Wikipedia in Latin, about 40 Latin Facebook groups around the world - and the pope's Twitter account in Latin is followed by nearly a million people. Not bad for a dead language."

In 2012, Pope Benedict XVI started the Pontifical Academy for Latin Studies to promote the use of Latin in the Church and elsewhere.

Many attempts have been made to bring Latin back to popular use. Some have tried to introduce new words for things that did not exist at the time of the Roman Empire. However, not all of them have caught on.

In the 1990s, for example, top Vatican Latin researcher Father Carlo Egger came up with some words for common objects in the home. For example, he came up with "machina linteorum lavatoria" for a washing machine. He also created "escariorum lavator" for dishwasher and "autocinetorum lavatrix" for carwash.

catch on –v. to become popular