What Is March Madness?

Update Required To play the media you will need to either update your browser to a recent version or update your Flash plugin.
By Dan Friedell
26 March, 2016


These days, you may hear people in the United States talking about March Madness.

But what does that mean?

Does the month of March make people angry?

No, of course not!

The competition takes place every March. And the madness it creates is excitement!

Sometimes mad is defined as angry. But here is another definition of the word: "marked by intense and unpredictable activity."

The three-week long college basketball tournament is exactly that. It involves 64 men's team and 64 women's teams from colleges and universities around the country. 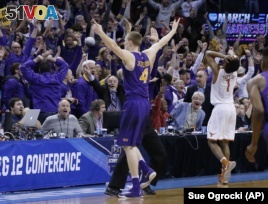 Another reason for the madness is that people bet a lot of money on the games. In 2015, the American Gaming Association said about $9 billion is bet on the tournament.

That is more than double the amount bet for the professional American football championship known as the Super Bowl.

All that money is enough to drive someone crazy!

The National Collegiate Athletic Association, or NCAA, puts on the basketball tournament.

The competition is made up of three divisions. The men's Division I tournament is the most popular. It features players who sometimes move on to professional careers in the National Basketball Association, or NBA, and other leagues around the world.

Some of the players who became famous in the NCAA tournament and now have major professional careers are Carmelo Anthony of the New York Knicks and Dwyane Wade of the Miami Heat. Retired NBA legends Magic Johnson, Larry Bird, Patrick Ewing and Michael Jordan all played in the NCAA tournament.

Even tournament players who do not "go pro," sometimes become folk heroes for the fans that support their teams.

Paul Jesperson of the University of Northern Iowa is an example. He will be famous in his state forever as a result of his game winning score in the tournament just a few days ago. Jesperson threw the ball from half-court with less than two seconds left in play. The crowd went wild when the ball went in the basket.

NCAA experts choose the teams to play in the tournament each year. When a team loses a game, it leaves the tournament. The tournament goes from 64 teams to 32, 16 and 4. The last two rounds are referred to as the Sweet Sixteen and the Final Four.

This year, the championship game will be played on April 4.

The tournament has been going on since 1939, but did not become a "madness" until 1979. That is when Michigan State University defeated Indiana State University. Two important players faced each other in competition: Michigan's Magic Johnson and Indiana's Larry Bird. Both went on to the NBA and great fame as two of the greatest basketball players ever.

The university with the most tournament championships is the University of California, Los Angeles, or UCLA. The Bruins, as the team is known, has won 11 times.

After this weekend's games, the tournament will be down to the Final Four.

Yale qualified for the tournament by winning the Ivy League for the first time since 1962. The league also includes Harvard University and Princeton University.

The games are usually exciting, adding to the madness. Even the players are big fans. Daniel Ochefu plays for Villanova. His family is from Nigeria and he lived there for a couple years when he was a teenager. He says great things happen in March.

"I know I was up late watching the Northern Iowa half-court buzzer-beater and the St. Joe's game. You know, it's March. Great things happening. We just don't want to miss them. So the TV's right there. We're laying in bed and just turn the TV on, and something great could happen."

Of course, when great things happen, that is when the madness ends.

Do you follow the NCAA basketball tournaments? Who are you rooting for? Write to us in the Comments Section or on 51voa.com.

madness – n. behavior or thinking that is very foolish or dangerous

mania – n. extreme enthusiasm for something that is usually shared by many people

crazy, drive crazy – adj. wild and uncontrolled, used in the phrase drive/make (someone) crazy to describe annoying or bothering someone very much

wander – v. to move around or go to different places usually without having a particular purpose or direction

bet – n. to risk losing something (such as money) if your guess about what will happen is wrong

buzzer-beater– n. a shot or goal made before the end of a period or game in a sporting event