What is the History of the Presidential Turkey Pardon?

Update Required To play the media you will need to either update your browser to a recent version or update your Flash plugin.
By John Russell
21 November, 2017


Every year, at a ceremony at the White House, the American president "pardons" a turkey.

Instead of becoming part of a Thanksgiving dinner in the United States, the bird's life is saved.

Stories on the origins of the presidential turkey "pardon" are numerous. Some of these stories date back to the presidency of Abraham Lincoln during the U.S. Civil War. 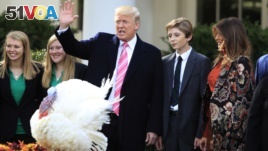 President Donald Trump with first lady Melania Trump, right, and their son Barron Trump, waves after pardoning the National Thanksgiving Turkey Drumstick during a ceremony in the Rose Garden of the White House in Washington, Tuesday, Nov. 21, 2017.

Edward Lengel is the chief historian of the White House Historical Association.

The boy answered that his turkey could not vote because he was too young.

"Therefore," Lengel said, "Abraham Lincoln pardoned his turkey and forgave him the possibility of being killed for the Thanksgiving table."

Some people say a later president, Harry Truman, was the originator of the modern-day turkey pardon. But the Truman Library and Museum disputes this claim.

According to the library's website, workers have found no evidence of "Truman pardoning a turkey that he received as a gift in 1947, or at any other time during his Presidency. "

Almost 20 years after Truman's presidency, President John F. Kennedy decided to spare a turkey brought to the White House for the Thanksgiving meal. He reportedly said: ‘No, I think I'll pardon this turkey and let it grow.'

Edward Lengel notes that Kennedy was the first president to give an official pardon.

"We know that John F Kennedy definitely began this tradition and it has continued on and off ever since."

After 1981, the custom of sending the pardoned turkey to a farm became accepted practice during the presidency of Ronald Reagan.

Even if the presidents pardon turkeys before Thanksgiving, they generally still eat a different turkey on the holiday.

The bird cooked for the president's meal is bought with his own money and prepared according to his taste and that of his family.

Nikoleta Iliclreported on this story for VOA News. John Russell adapted the report for Learning English. George Grow was the editor.

stroll – v. to walk slowly in usually a pleasant and relaxed way. The verb can be followed by along, down, across, or around.

booth – n. a temporary structure for shelter or some other purpose

spare – v. to choose not to punish or harm (someone)