Update Required To play the media you will need to either update your browser to a recent version or update your Flash plugin.
By VOA
Oct 16, 2017


Transnational criminal activity ranges from trafficking in drugs, humans, wildlife, and firearms, to money-laundering and counterfeiting medicines, consumer goods, and other intellectual property. Organized crime causes serious harm to every society at every level; it spreads corruption and destabilizing governments; drains profits from legitimate manufacturers and vendors; and victimizes individuals in a variety of ways.

The Administration of President Donald Trump considers the fight against transnational crime to be of primary importance. Of concern to the United States is the trafficking of drugs, particularly the production and trafficking of heroin and increased coca cultivation and cocaine production in the Americas. Illicit drug production and trafficking not only pose great risks to local communities in the U.S. and overseas, but also fuel transnational organized crime, corruption, money laundering, and cybercrime. 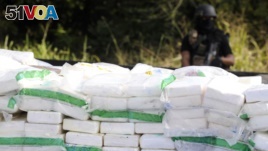 FILE - A police officer stands guard behind rows of confiscated drugs inside a military base in Santo Domingo.

“The United States has a global interest and indeed, imperative, to help create a future where all nations can be prosperous and secure,” said Deputy U.S. Representative to the UN Economic and Social Council Stefanie Amadeo.

“Through international cooperation, we can work toward achieving these goals. Criminals do not respect political boundaries or legal jurisdictions, so our prosecutors and investigators must increasingly look outside their own borders to find evidence, witnesses, and stolen assets,”

That is why President Trump has asked the U.S. government to strengthen efforts to dismantle transnational criminal groups, and align U.S. resources more effectively.

But for this effort to succeed, all nations must tackle this problem together. We applaud the UN Office on Drugs and Crime and the International Narcotics Control Board for taking steps to accelerate information sharing and analysis with regard to the many substances and precursor chemicals used to make synthetic opioids. We also support international drug demand reduction programs, as well as substance use disorders treatment that can improve quality of life and reduce associated violence.

“We know that most solutions to drugs and crime will be found ... by doctors in emergency rooms that are flooded with overdose victims; police officials who respond to murders; investigators who trace links between drug traffickers, money laundering, and terrorists; and prosecutors who risk their lives to ensure that victims receive justice.”

“The United States is committed to making sure they succeed.”