Update Required To play the media you will need to either update your browser to a recent version or update your Flash plugin.
By VOA
Apr 30, 2018


The continuing state of emergency in Turkey, imposed after the July 2016 coup attempt, has led to the severe curtailment of many fundamental freedoms, according to the latest State Department Human Rights Report.

John Sullivan, who was serving as Acting Secretary of State at the release of the report, pointed in particular to “the detention of tens of thousands of individuals, including journalists and academics, under an ongoing state of emergency that has undermined the rule of law [in Turkey].”

The Human Rights report notes that as of the end of 2017, Turkish authorities had dismissed or suspended more than 100,000 civil servants from their jobs, arrested or imprisoned more than 50,000 citizens, and closed more than 1,500 nongovernmental organizations on terrorism-related grounds since the coup attempt, primarily for alleged ties to cleric Fethullah Gulen and his movement. The government has accused Gulen of masterminding the coup attempt. 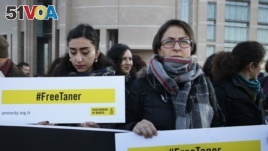 Arrested in October 2016, U.S. citizen Pastor Andrew Brunson remains in a Turkish prison after being charged with action in support of a terrorist organization and espionage. NASA scientist and U. S. citizen Serkan Golge was arrested in July 2016 and convicted in February 2018, without credible evidence, for “being a member of a terrorist organization.”

These cases, and those of three Mission Turkey employees, are symptomatic of the breakdown in the rule of law that has occurred under the state of emergency, which has facilitated arbitrary arrest and detention. This has been the fate of tens of thousands of individuals, mostly Turkish citizens, who are unlikely to receive a fair trial and due process in the face of executive interference in the judiciary.

“Promoting and defending human rights and fundamental freedoms are central to who we are as a country,” said Mr. Sullivan. The United States will continue to support those around the world struggling for human dignity and liberty – including in Turkey.